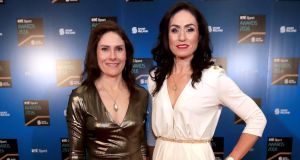 While the rest of us were gently easing ourselves in to 2020, a whole clutch of our sports people had no such luxury, instead having to step up their winter training in preparation for the start of their year’s competitive work.

Among them were Katie-George Dunlevy and Eve McCrystal who, with the UCI Para-cycling Track World Championships scheduled for the end of January, had to catapult themselves in to the year.

The pair were part of an 11-strong Irish squad that took part in three training camps, in Derby, Portugal and Mallorca, ahead of the event in Milton, Canada, and it’s fair to say, the work paid off handsomely.

The bulk of Dunlevy and McCrystal’s success to date has come on the road, having won five gold medals at Para-cycling Road World Championships.

But they transferred that pedigree in to their track performances in Canada with aplomb, not only winning silver in the Tandem Pursuit but breaking their own national record en route to that medal.

In the qualifying round they knocked three seconds off that record before losing in the final to the dominant New Zealand team of Emma Foy and Hannah Van Kampen, who had broken the world record earlier in the competition.

It was Dunlevy and McCrystal’s finest ever world track result – they also produced an impressive performance in the Tandem Time Trial where they finished fifth – and a perfect start to a year in which their chief goal is, of course, to add yet more Paralympic medals to their collection when they compete in Tokyo.

Another cyclist to have a memorable trip to Canada was Richael Timothy, the former Roscommon Gaelic footballer, who took bronze in the 10km C3 Scratch race, her first medal on the world stage, as well as having top six finishes in three other events. We suspect it won’t be long before we’ll be adding her to our awards’ roll of honour.

For now, though, it’s Dunlevy and McCrystal who pick up yet another monthly award. They’ve started the year as they mean to go on.

December: Fionnuala McCormack (Athletics). In her record 16th appearance at the European Cross Country Championships, and a record 38th senior appearance for Ireland, the Wicklow woman just missed out on a medal in the individual race, finishing two seconds behind the bronze winner, but led the team to silver, Aoibhe Richardson and Ciara Mageean’s top 20 finishes sealing the success.

1 Avoid the treadmill at all costs – marathon training in the 2km radius
2 Rich Premier League clubs way off the mark in cutting staff pay
3 Sonia O’Sullivan: Taming The Tan gave us one last roll of the dice before shutdown
4 ‘NRL Island’ being considered in Australia to continue season
5 Reality Bites – Tales from the new normal: Shane O’Donnell
Real news has value SUBSCRIBE