Gentle game took a battering in Melbourne, bouncing from one PR disaster to the next 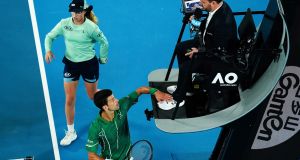 Novak Djokovic taps chair umpire Damien Dumusois on the foot after receiving a time violation during the men’s singles final against Dominic Thiem at the Australian Open. Photograph: Dave Hunt/EPA

Few sports guard their image with as much diligence as tennis. For a fortnight, the pretty face of the gentle game took a battering in Melbourne, bouncing from one public relations disaster to another, and the bruises will last.

The image meltdown began with the reluctance of the Australian Open to acknowledge with sufficient speed and clarity what everyone in the city – everyone in the country and around the world – knew about the choking effects of bushfire smoke. It then moved on to the similar impact the twisted moral rectitude of Margaret Court had on everyone not born in the 19th century, most publicly Martina Navratilova and John McEnroe, who objected to the 77-year-old legend’s hardwired homophobia and almost forgotten apartheid apologia. Holy smoke, indeed.

Presentation is everything. While the cheerleading television companies covering the first slam of the season for a worldwide audience of many millions could hardly ignore what their viewers saw through the yellow/brown haze on the screens, most dramatically the on-court coughing collapse of Dalila Jakupovic, it took the tournament days to satisfy the curiosity of the media and the inquiries of worried players and spectators about what constitutes safe air in Melbourne Park.

But there was one exclamation mark left to put on the sentence of embarrassment. It arrived at the end of the ninth game in the second set of the men’s final on Sunday evening when Novak Djokovic had his Serena Williams moment. He was enraged, with minor justification, that two violations for slow serving had shredded the steel grip he normally has on his emotions. So, with all the assurance of an entitled champion, he tapped the foot of the chair umpire, Damien Dumusois, and, to borrow from Australian argot, “gave him a serve”.

The damage was done. Again. Because he is playing tennis from Mars (albeit via Hades), Djokovic recovered to beat Dominic Thiem, cast in the Naomi Osaka role here (except, unlike the Japanese player in the 2018 Flushing Meadows final against Williams, the Austrian lost, and that matters in this tale).

In the euphoria of Djokovic’s eighth Melbourne victory, the moment was briefly parked, to resurface only when the winner remembered his obligation to put a sheen on the event. Correctly again, he apologised for his crassness. Sort of. Trying to patch up the image thing with a smile, he said: “For touching his shoe? I mean, I didn’t know that’s completely forbidden. I thought it was a nice, really friendly touch.”

It was not a good look, for himself and for the tournament that had just made him 4.2 million Australian dollars (€2.4 million) richer. Because he is charming and intelligent, he reckoned he’d pulled it off. However, like the fire smoke, there was a lingering whiff of something being not quite right. The headlines were awful. Someone looked up the rules. He could be fined 30,000 Australian dollars (€18,000) for that sort of thing – like Williams, who had to pay a little less in the end.

So on Monday, when he should have been glorying in his victory, he apologised again. “Sometimes you do things that you’re not happy with and you go through different emotions. You go through ups and downs. Of course, I’m not happy that I touched the chair umpire. And I’m sorry if I offended him or anybody else.” Put to bed. Done. Move on. Image saved. Or maybe not.

Court will regard her visit as a triumph, honoured on the 50th anniversary of her calendar slam, with her eponymous stadium still in place – despite Navratilova’s campaign to have it changed to Evonne Goolagong Arena.

Court will be back, saying whatever she wants. So will Djokovic. Will Navratilova? Will McEnroe? They were backed into a corner to stop rocking the bloody boat, guys. Maybe they won’t bother to make the trip next time. It’s a long way to go to be humiliated when you know you’re right.

The odds are Djokovic will win the men’s title again. At his best, nobody can touch him, except Rafa Nadal on clay if fit. Federer couldn’t beat him with two match points at Wimbledon last summer. Nor could he protect a 4-1 and 5-2 lead in the first set against Djokovic in the semi-finals.

Djokovic, on 17 majors now, could add two of the remaining three slams in 2020. So, this time next year, if he won a ninth Australian Open, he could sit alongside Federer on 20 career majors – with Nadal, if the Spaniard wins in Roland Garros this summer. All three of the Big Three sharing 60 grand slam titles, equally and nervously, each wondering which of the other two will leave the party first. That’s some image.

And it’s some party. For all the nonsense of the past fortnight, tennis continues to amaze. If only it would lighten up a little. If only it would say in public what it says behind closed doors, like Navratilova and McEnroe – and, probably, Djokovic.