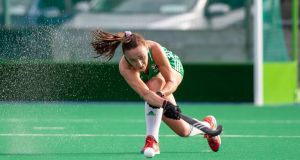 Ireland’s trip to Malaysia next month, which was to form part of their build-up to the Olympic Games, has been cancelled due to fears over the coronavirus, with Hockey Ireland now trying to come up with an alternative destination for the squad’s warm-weather training camp.

There is a possibility that the squad will return to South Africa from where they returned just over a week ago after a training camp and series of matches against their hosts and Germany. A three-week slot in their schedule, between mid-March and early April, now needs to be filled as they continue with their preparations for Tokyo.

Back home, Cork Harlequins’ recent recovery in form will face its sternest test yet when they host joint Hockey League leaders Loreto on Saturday. Top four finishers in the competition in the last three campaigns, Harlequins’ campaign began with two draws followed by four successive defeats, leaving them in relegation trouble a week in to December, but they’ve won their last two games, either side of the winter break.

Cliodhna Sargent and Yvonne O’Byrne, with over 300 Irish caps between them, both returned to Hockey League action last weekend, having recovered from injuries, Sargent scoring in their 2-0 win over Railway Union. That win lifted them four points clear of the relegation zone, but still six short of the top four, so they’ll need to keep that recovery going if they are to make it to the Champions Trophy weekend again.

Loreto, who lost to Harlequins on penalty strokes in last season’s Irish Senior Cup final, joined Pegasus on 19 points at the top of the table with last weekend’s 3-1 win over Belfast Harlequins, their fifth victory in a row. They’ll take some impressive form with them, then, to Cork.

Pegasus, meanwhile, host third-placed Old Alexandra at Queens a week after dropping points for only the second time this season in their 1-1 draw away to Muckross. UCD and Pembroke Wanderers are both at home to teams from the bottom three, Railway Union and Catholic Institute, respectively, while bottom club Belfast Harlequins, still seeking their first win of the season, host Muckross.