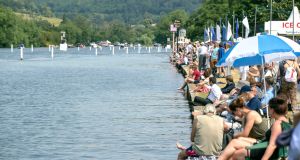 Spectators gather to watch the rowing during day one of the 2018 Henley Royal Regatta alongside the river Thames. Photograph: Steve Parsons/PA

Paul O’Donovan and Gary O’Donovan made a winning debut at Henley Royal Regatta. The Skibbereen double looked right at home on the famed two-lane river course in front of appreciative crowds. They started with precision and speed and beat the Leander crew of Stephen Cox and Irishman Tiernan Oliver with plenty to spare.

Their challenge on Saturday against the powerful Romanian heavyweight double should be much more testing.

Two Irish crews reached the end of their Henley odyssey. Cork Boat Club were beaten by Montclare Mounties in the Thames Cup for club eights. The New Jersey crew blasted into the race off the start and led by one length as the crews left the Island behind.

Cork’s fine run at Henley had been built on belief in their technique and a good tempo and they stayed in touch and then ate into the lead in the fourth quarter, reaching up to half a length with the line in sight. But Montclare, built around a fine schools’ crew, did not relent. They sprinted home and won by three-quarters of a length.

NUIG’s defeat in the Prince Albert for student coxed fours came in a different manner. They led until the final stages, but were then passed by Columbia University, who pushed into a clear lead on the line.