Wimbledon: Serena Williams back in the swing of things as Stephens crashes out

US Open champion suffers straight-sets defeat in first round 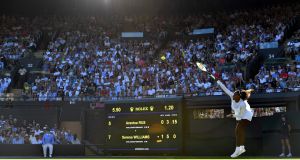 The last time Serena Williams played at Wimbledon, two years ago, she was single, in her later-pomp and had to cope with a breeze that gusted around Centre Court – as well as the determined challenge of Angelique Kerber – as the American equalled Steffi Graf’s haul of seven titles.

On her return on Monday – in the first round on No 1 Court this time – the wind was still blowing, but so was Williams, forever a champion but a mother now and struggling to beat the world No 105 Arantxa Rus, a tall Dutch left-hander who resembles Maria Sharapova in appearance and even in dogged fighting spirit, although she is not quite there on the key points. Nevertheless, Rus caused Williams enough problems before the finest player of her era ground out a 7-5, 6-3 win in an hour and a half that might have seemed a good deal longer to the 36-year-old winner if not the 27-year-old loser.

Williams, whose shoulder collapsed on her at Roland Garros to the point where she had to pull out of her fourth-round match against Sharapova, said: “I don’t think I was at my best today, but I’m practising much better. My arm is doing much better. My serve is a little playing catch-up, but it’s doing better than I could have hoped, to be honest. It’s all on the right on track.”

Williams’s serve did not quite crank up to full capacity in the tricky conditions but she managed five aces and 21 unreturned serves from 72. Her fastest effort reached 115mph, a little below her best. However, her return percentage of 80 put a serious dent in Rus’s serve.

While there were passages of play when Williams – invited back to Wimbledon with a No 25 seeding and a world-ranking of 181 – looked decidedly wooden, she overcame, as she invariably does. In 18 visits she has never lost in the first round.

Some of the Williams artillery was rusty, still, and she might have sealed the first set in the 10th game had she chosen to attack a limp reply by moving in to take the volley, but the moment passed.

When they shared the first four points of Williams’s service game, the contest took on a distinct edginess, the American now as vocal as ever in her efforts to find some of the old magic. “Come on,” she screamed as she held.

Martina Navratilova (whose agent finally negotiated a pay rise with the BBC to move her closer to John McEnroe’s stratospheric pay cheque) was the perfect observer to spot the unique pressure Williams was enduring. “The older you get, the more nervous you get,” the nine-times champion said. “You’re at the end of your career; you don’t have 10 years to go.”

Williams’s championship quality surfaced when it mattered. As Rus fought to stay in the first set her racket trembled and a forehand inched long. Williams, not at her best on a muggy day, looked mightily relieved. As she rested before the second set, she closed her eyes and breathed heavily. Nobody could be certain what she was going through – not even Navratilova.

Rus, meanwhile, gave it all she had. She broke in the second game of the second set and Williams, after taking a tumble, hit long to trail 3 - 1. The anxiety quotient shot up alarmingly. But she would stop the Dutch charge right there, even though it took a lot longer than she would have liked.

Her spirits rose again: two solid, hard-fought breaks and she was serving for the match. In a twinkling the rhythm, the power and the judgment coalesced like rivers running to the sea. But the finish was as angst-ridden as the whole match.

A tapped volley set up two match points, then she squandered the first with a rash thrash to the deuce corner and Rus saved again with a blinding forehand down the line for deuce.

At the third and fourth attempts to close it Williams could not control forehands from deep that caught the eddying breeze and had to fight through a third deuce point to get a fifth chance. Rus got up on her toes to blast an angled winner, and on they went.

Williams got a sixth chance. This time, she powered down her first serve for control, moved Rus deep behind the line and forced a final error.

It was her 87th victory at Wimbledon. It justified, up to a point, the tournament’s decision to give her a seeding. And it gave her hope. She has six matches to go to create more history, to draw level with Margaret Court on 24 Majors.

The American has a day to rest now before her second-round match against the Bulgarian Viktoriya Tomova, who defeated Tereza Smitkova in straight sets. She will need it.

US Open champion Sloane Stephens crashed out in the first round after a straight-sets defeat to Donna Vekic.

Stephens, who was also the runner-up at the French Open last month, was downed 6-1 6-3 by the unseeded Croatian.

It was a tough draw for the fourth seed as Vekic is a threat on the grass but Stephens put in an erratic display.

The American had not played since that loss to Simona Halep in Paris and her ring-rust showed as Vekic dominated from the off.

She raced to the first set in just 26 minutes with two breaks of serve but found herself on the back foot when Stephens broke to lead 2-0 early in the second.

Stephens could not capitalise, though, as Vekic won six of the next seven games to complete the biggest Wimbledon scalp of her career after previous first-round exits to Venus Williams and Johanna Konta in the last two years.

“I am very happy to win today, it was a tough match,” Vekic said. “I am really happy.

“I tried to go out there and be aggressive, I was struggling with my serve, it was windy, so I am happy to get through.

“I played all the tournaments on grass, I really enjoy playing on it and it helped me.”

Stephens’s compatriot Madison Keys eased through to the second round, the 10th seed beating Australia’s Ajla Tomljanovic 6-4 6-2 in 63 minutes.

Magdalena Rybarikova had earlier became the first seed to lose as she was beaten by Sorana Cirstea.

The 19th seed, who reached the last four in Birmingham a fortnight ago, was downed 7-5 6-3 by the Romanian.

Yanina Wickmayer was the first winner of this year’s tournament as she beat Mona Barthel.

The unseeded Belgian defeated Barthel 7-5 6-4 on Court 18 to become the first woman through to the second round.

1 Waterford turn Kilkenny upside down and inside out
2 Jim McGuinness: There is a way to save championship and make it competitive
3 Has Mike Tyson completed the least likely redemption story in American sport?
4 Ireland’s work-ons: Four things Andy Farrell needs to address
5 Waterford’s frenzied waves of attacks too much for Kilkenny
Real news has value SUBSCRIBE