Rafael Nadal far from fluent in victory; Djokovic packs them in on outside court 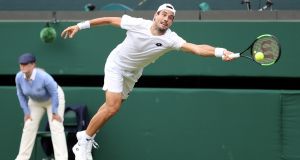 Argentina’s Guido Pella returns to Marin Cilic of Croatia in their second-round match at the Wimbledon Championships. Photograph: Sean Dempsey/EPA

One of the main obstacles blocking Roger Federer’s path to a ninth Wimbledon title has been removed after Marin Cilic fell to a shock second-round defeat that was largely of his own making.

The No 3 seed lost 3-6 1-6 6-4 7-6 (7-3) 7-5 to Guido Pella, an Argentinian left-hander who took advantage of a rain delay on Wednesday night before returning on Thursday to claim the biggest win of his career.

Cilic, who defeated Novak Djokovic in the final of Queen’s last month, had led by two sets before the rain started to fall on Wednesday. Farce soon reigned on No1 Court as dusk fell and officials made a doomed attempt to wrap the match up, even though play had been suspended on the outside courts because of slippery conditions.

The players spent a long time warming up while a court inspection took place and Cilic, who was a possible semi-final opponent for Federer – who also defeated him in last year’s final – would regret allowing play to resume. He slipped while serving at 3-3 in the third set, allowing Pella to secure a crucial break, and that was the cue for the umpire to call it off the night.

The delay worked in Pella’s favour. He held to force a third set, snatched the fourth on a tie-break and held his nerve in the decider.

Cilic looked shorn of belief by the end. The former US Open champion’s aim was awry and he had to save two match points with some excellent serving in the 10th game. Yet Pella, who faces Mackenzie Macdonald of the US next, kept pushing. A third opportunity went begging when he sent a forehand return long off a second serve, but there was no escape for Cilic, who crashed out after netting a tight forehand.

Pella had never won a match at Wimbledon before beating Jason Kubler this week. “It’s not my favourite surface but I am trying to improve,” the 28-year-old said. “The rain came and today I felt much more confident on my serve. I was so calm.”

The scoreboard said 6-4 6-3 6-4 to Rafael Nadal but it was an uneasy two-and-a-half hours for the Spanish world number one as he laboured past Kazakhstan’s Mikhail Kukushkin into the third round.

Twice champion Nadal, 32, never quite got to grips with the unorthodox Kazakh’s low, skidding shots and faced 13 break points in an entertaining Centre Court contest.

Had Kukushkin converted a few more of them it could have got really complicated for Nadal, who is still finding his grasscourt game after claiming an 11th French Open title.

The mere mention of Lukas Rosol, Steve Darcis and Dustin Brown – all of whom have knocked him out at the All England Club since he won the 2010 title – is enough to make Nadal’s face crease into a frown.

He also got a fright from Kukushkin when he dropped the opening set at Wimbledon in 2014 so there was clear relief in his voice as he stopped for a BBC TV interview on his way back to the locker room after a second successive straight-sets win.

“It was very tough because he played very well and his shots stay very low so it was a good test,” Nadal said.

“I am happy to go through, I think I played better than the first day. The most important thing is you can’t save your body at Majors, you have to give your best.

Nadal took 10 minutes to hold his opening service game but, when he broke quickly in the next game and held to love for a 3-0 lead, it seemed Kukushkin had already shot his bolt.

The Kazakh, with a curious undercut double-handed backhand and some clever angles, broke back to level at 3-3 though before Kukushkin wobbled when serving at 4-5. Nadal wasted one set point with a poor slice into the net but got his nose in front when Kukushkin netted a simple-looking forehand.

An early break in the second set helped Nadal move into a two-set lead but he could not shake off the world number 77 who reached the semis on the Eastbourne grass last week.

Nadal was given his second time warning of the match by umpire Carlos Bernardes when he took forever to get himself organised on his courtside chair for the start of the third set.

Nadal had to fight off more break points but Kukushkin finally broke for a 3-1 lead as Nadal hooked a forehand wide after being taken out of his comfort zone – something Kukushkin did well throughout the match.

The response was emphatic though and Nadal broke back and then pounced again for a 5-4 lead. Serving for victory he made a complete hash of a simple volley but minutes later finished the job when a Kukushkin forehand slapped the tape.

Second seed Nadal is in to the third round for the eighth time where he will face Australian teenager Alex De Minaur.

Novak Djokovic might have needed to get his sat-nav out to find his way to Court Two at Wimbledon but once he arrived it was all one way traffic as he reached the third round with a 6-1 6-2 6-3 win over Horacio Zeballos.

The last time Djokovic had to venture on to an outside court at the All England Club was in 2009, when he played a fourth-round match against Dudi Sela on Court 3.

Since then he has become accustomed to playing in the biggest arenas the sport has to offer while amassing a Grand Slam trophy haul of 12 – including three at Wimbledon – and collecting more than $100 million in prize money.

While the audience numbers were more limited on Court Two compared with his usual playing fields of Centre and Court One, Djokovic still made it a day to remember for the 4,000 fans who had crammed into the more intimate arena.

He coasted towards his 60th win at Wimbledon by breaking his 126th-ranked Argentine opponent six times and fired down 15 aces.

The only cause for concern was when Djokovic suddenly started wincing while running along the baseline in the seventh game of the third set and called on the trainer to get his left thigh massaged.

That interruption only delayed the inevitable for Zeballos, who lost both games after the resumption to bow out.

Twelve months after his 2017 season came to an abrupt end at Wimbledon, when Djokovic retired in the quarter-finals with an elbow injury, the Serb served notice that he should be considered as one of the title contenders despite being ranked only 21st in the world.

He has dropped only 12 games in two matches and appeared in top form on Thursday – until the sight of a trainer massaging his thigh raised a few question marks.

The 12th seed will next take on either home hope Kyle Edmund or American Bradley Klahn.

Wawrinka, winner of three Grand Slam tournaments, trailed by two sets overnight but was 6-5 ahead in the third when play resumed in muggy conditions.

He then had two set points in the tiebreak but could not convert either, spraying one backhand well wide, and the 29-year-old qualifier Fabbiano completed the biggest victory of his career.

Since reaching least year’s French Open final Wawrinka has tumbled down the rankings from three to his current 224, mainly as a consequence of the knee surgery he required last year.

John Isner almost snatched defeat from the jaws of victory but survived to beat Belgian qualifier Ruben Bemelman in their delayed second-round match.

On Wednesday, he led two sets to love and held a match point in the third set but the 105th-ranked Bemelmans stormed back to win two tiebreaks and level the match before rain intervened.

On the resumption Bemelmans came close to a big shock when Isner served at 4-5 and trailed 15-40 but he saved both match points with booming aces, two of the 64 he sent – down – the fourth highest total ever at Wimbledon.

Bemelmans tightened up at 4-5 and double-faulted on the way to being broken and Isner wrapped up victory, despite facing a break point, in the following game as he forced an error.