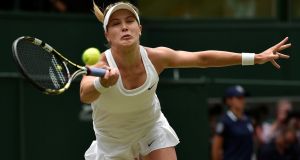 Canada’s Eugenie Bouchard in action during her march to the final year at Wimbledon in 2014. 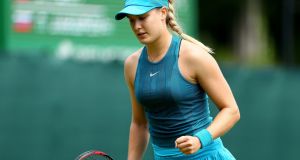 The longer the interview went on, the more it seemed that nothing was going to elicit an interesting answer from Eugenie Bouchard. The Canadian had walked off court with an important victory in the bag but it was difficult to tell from her icy demeanour as she responded to questions about her first-round win at Wimbledon qualifying last Tuesday.

There was no hint of joy, no attempt to engage. The interviewer could have revealed that the world was about to end and Bouchard still would have said: “Yeah, well, obviously I’ll just take each apocalypse as it comes,” in a glib monotone. It was a masterclass in passive-aggression and Bouchard inevitably came in for criticism.

There was a widespread view that a touch more gratitude would not have gone amiss. An alternative opinion, however, is that ordering someone to look happy is rarely a good look. It brings to mind that scene from Curb Your Enthusiasm where a chirpy woman tells Larry David to smile as they pass each other on the street. Larry turns and glares. “Hey, mind your own business, how about that?” he barks. “Smile ?”

We assume we know an athlete from these snap exchanges and gripe when they refuse to play ball. The wealthy star who cannot be bothered to crack wise raises suspicion. They come across as detached from reality and the urge to attack their apparent insularity grows. Yet the qualifying tournament at Roehampton must have felt like a strange, lonely place for Bouchard – a beaten Wimbledon finalist four years ago – and it is possible to understand why a player of her fame seemed so glum after beating China’s Lin Zhu, the world number 129. The 24-year-old was a target for wannabe giantkillers.

There was no glory on offer for her but the potential for embarrassment was high in modest surroundings that emphasised the not-so-mighty Bouch’s fall from grace. The world number 188 had, after all, failed to qualify for last month’s French Open and there was considerable relief when she secured her spot at SW19 with a convincing win over Colombia’s Mariana Duque-Marino on Thursday.

How times change. It is four years since Bouchard shot to prominence as a precocious youngster, building on semi-final appearances at the Australian and French Opens by reaching a maiden Wimbledon final, thanks to wins over Angelique Kerber and Simona Halep . Petra Kvitova proved too strong on Centre Court but the future still looked bright for Bouchard. Greatness beckoned. Life moves fast at the highest level, however.

It is an unforgiving, punishing sport and Bouchard has barely won a match of any significance since losing to Kvitova. The former world number five has not made it to the second week of a grand slam since reaching the fourth round of the 2015 US Open and has earned only $134,713 in prize money this year. Injuries have hit her hard and the deterioration in her game has led to questions about her focus.

On she slogs, though, and it is worth remembering that qualifying for a slam is tougher than it looks. The path is littered with numerous pitfalls and although Bouchard kept her footing, a trio of big names suffered in the men’s draw at Roehampton. Let’s start with Australia’s Bernard Tomic, the former prodigy who was given a $20,000 fine for a lamentable performance during his first-round defeat by Mischa Zverev last year . Tomic feigned injury and said he was “a little bored” – but not bored enough, apparently, to quit tennis for good.

After a flirtation with reality TV earlier this year, the former Wimbledon quarter-finalist made it to Roehampton and slumped to a one-sided defeat by Belgium’s Ruben Bemelmans on Thursday, only to slip into the main draw as a lucky loser . The world number 162 plays Poland’s Hubert Hurkacz on Tuesday. Yet how long Tomic sticks around is anyone’s guess and the thought occurs that there were more deserving recipients of a stroke of good fortune.

No doubt Dan Evans, the gifted former British number two, will feel a little aggrieved when he sees Tomic taking on Hurkacz. Evans has performed well on grass since returning from a drugs ban and there were many who thought the All England Club should recognise the maverick’s form with a wild card. Yet the people in charge disagreed , forcing Evans into qualifying, where he fell to the German veteran Matthias Bachinger.

The 22-year-old Australian’s injury problems refuse to go away and although Kokkinakis beat Roger Federer in Miami earlier this year , he has since lost in French Open and Wimbledon qualifying. One setback follows the next and it all starts to add up. Pride is dented, optimism is diminished and youthful exuberance gives way to weariness.

The world begins to feel like a harsher place as the doubts grow. It can be hard to keep plugging away, to keep smiling. The guard goes up; terse interviews go viral. “I don’t want to compare myself to the past,” Bouchard says. She can only look to the future, starting with her match against Britain’s Gabriella Taylor on Tuesday. Her outward appearance might hide her true emotions but Bouchard will surely feel like the luckiest person in tennis when she steps on court. – Guardian