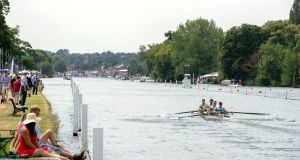 Spectators gather to watch the rowing during day one of the 2018 Henley Royal Regatta alongside the River Thames. Photograph: Steve Parsons/PA Wire

A wonderful first day for Irish crews at Henley Royal Regatta culminated with a thrilling win for NUIG. The coxed four gutted it out after trailing in second for almost the entire 2,112 metres of the Prince Albert heat. They passed Nereus of the Netherlands only coming up to the line as the cheering crowds almost pulled them over the line. They won by a canvas in a photo finish.

The three other Irish crews all won on the first day of races on the River Thames, but in contrasting fashions. Cork Boat Club’s eight, stroked by Leaving Certificate student Barry O’Flynn, trailed early on but rowed down Potomac by halfway in the Thames Cup. Trinity accounted for University of London ‘B’ with aplomb in the Temple eight. A good start; a clearwater lead by halfway; over the line with no fuss. They meet Syracuse, a selected crew on Thursday.

Neptune had started the day with a similarly impressive win over Tideway Scullers C in the Fawley Cup for junior quadruples. Their opponents pushed hard coming up to the line but the Dublin crew were rock solid.

In the Double Sculls challenge cup, Paul O’Donovan and Gary O’Donovan, who were invited to the event, were selected (seeded) and they will go into action first at the quarter-final stage on Friday.