Patriots’ defeat may signal end of the celebrated Brady-Belichick partnership 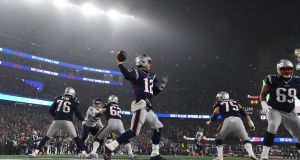 With nine seconds left in what might have been his last game as a New England Patriot, Tom Brady was still trying to figure out what went wrong. A moment earlier, in his final act on the Gillette Stadium field late on Saturday night, Brady threw a pass from his end zone that was deflected, then intercepted and returned for a touchdown.

After walking slowly to the sideline, Brady sat alone and motionless on the bench, his helmet on the ground between his feet. All around him dozens of teammates and team personnel scurried at a frenzied pace, a harried dance triggered by the stunning end of a Patriots season gone bad.

No one spoke to or approached Brady, who coolly reached for a light-blue tablet to view a replay of the interception. He leaned forward so his face was close to the screen, but remained altogether still except for one finger that skimmed across the screen.

As Brady finally lifted his gaze to the scene around him, the final seconds of the Patriots’ 20-13 playoff defeat to the Tennessee Titans elapsed. Trailing since late in the second quarter, New England had been soundly thumped by the Titans, whose rugged running back Derrick Henry thundered through the NFL’s top-ranked defence for 182 rushing yards on 34 carries.

The defending Super Bowl champions would be denied their quest for a record seventh Super Bowl, unceremoniously bounced from the NFL playoffs in the opening round by the lowest-seeded team in their conference.

When Brady at last rose from the bench, he was still unaccompanied. There would be no embrace with coach Bill Belichick, who had already hastily made his exit.

The defeat may signal the beginning of the end for the celebrated Brady-Belichick partnership, a combination that has made New England America’s foremost sports dynasty of this century. But after the game, neither man was in the mood for contemplating the moment or its weight.

Brady (42) would become a free agent for the first time in his career unless signed to a new contract by New England. Since Brady had been unusually vague about his future this season – and put his Boston area mansion up for sale in August – there had been much speculation that he might retire. But on Saturday, playing next season was the only thing he did address.

Asked if retirement was a possibility, Brady smiled and answered: “I would say it’s pretty unlikely, but yeah, hopefully unlikely.”

Twice he was asked if he wanted to return to the Patriots, or expected to, and his responses were open to interpretation since he briefly referred to his Patriots experiences in the past tense.

As he spoke Brady also had a quizzical expression on his face, which was wholly uncommon. Typically self-assured, Brady looked as if he didn’t know exactly what to say. Or perhaps had not made up his mind.

Brady praised the team owner Robert K Kraft and Belichick, and said he “loved the Patriots”.

“There’s nobody that’s had a better career, I would say, than me, just being with them,” he said.

But when his future with the Patriots came up again a few minutes later, Brady said: "I was proud to be a part of this team. Again, I just don’t know what’s going to happen and I’m not going to predict it.”

He added: “I’ve loved playing for this team for two decades and winning a lot of games. I’ve always tried to do the right thing. Who knows what the future holds, so we’ll leave it at that.”

Since the game was just the Patriots’ fourth loss in their last 24 post-season games at home, it would very likely be a forgettable outcome in the history of the team – unless it was Brady’s last game with the franchise.

Deftly mixing the run and the pass, and some trick plays, New England built a 13-7 lead midway through the second quarter. The Patriots attack looked fluid, versatile and unpredictable – all things it had not been for most of the regular season.

In the same stretch, though, New England twice floundered near the Titans’ end zone, and had to settle for field goals, which proved to be pivotal. The second time was especially damaging since the Patriots had a first down at the Titans’ one-yard line.

Meanwhile, Henry gashed New England for 49 rushing yards in the first quarter, and he ramped up that assault in the second quarter, cresting the 100-yard rushing mark before the game’s intermission.

When Henry bulled his way into the end zone with 35 seconds remaining in the second quarter, he gave Tennessee a 14-13 lead they never relinquished. The Titans continued to control the line of scrimmage, and New England only briefly crossed the 50-yard line once early in the fourth quarter.

Although Tennessee have now won eight of their past 11 games, Henry said his team would relish its underdog status as the post-season progresses.

“That’s the way we like it,” Henry said. “We want it gritty; we want it dirty. We don’t want anything easy.”

Clinging to a one-point lead in the fourth quarter, Titans Coach Mike Vrabel, who played eight seasons under Belichick, seemed to steal a tactic from his mentor. Tennessee took back-to-back five-yard penalties – a delay of game and false start – and burned 1:55 off the clock before punting, thanks to an NFL rule which calls for the clock to keep running after a penalty is enforced.

The Patriots’ last gasp on Saturday began when a Titans punt was downed inside the New England one-yard line with 15 seconds left in the game. Brady trotted onto the field and attempted his 37th pass of the game and the 11,614th of his 20-year career with the Patriots.

His throw ricocheted off the intended receiver, Mohamed Sanu, and landed in the arms of Titans cornerback Logan Ryan, who dashed untouched into the end zone.

When it was suggested to Brady afterward that his last pass as a Patriot, or an NFL quarterback, might be a pick-six, Brady threw up his hands and shrugged.

Besides by then Brady, who predicted that his football career was probably not yet over, had dissected what he might have done different on the play. It might be useful in the future. – New York Times