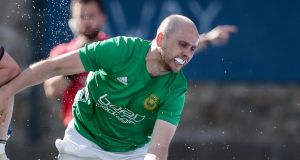 Rowland Rixon-Fuller: he previously lined out for Zimbabwe outdoors up until 2015. Photograph: Laszlo Geczo/Inpho

Irish men’s hockey indoor coach Kenny Carroll says that while his side would never enjoy “ideal preparation”, things are coming together nicely for their maiden European Championship campaign which starts in Spain next week.

When they take to the court in Santander against Wales, it will be a first international indoor tie for the country since 1987 in Loughlinstown.

While they competed internationally then, they did not take part in any of the continental tournaments which have been running since 1974.

Carroll has been a long-term practitioner of the short form of the game, playing for Railway Union in Euro club action five times, but admitted he “never thought this would come around”.

He is also a regional development officer for Hockey Ireland, and says that it is a format to be embraced to bolster the sport.

“I personally feel in Ireland and worldwide if you are going to grow the game you have to do it through indoor hockey,” he told The Irish Times.

“It’s great getting new [astro outdoor] pitches laid, but it will never be a groundbreaking number. What we do have all over is indoor sports halls.

“In bad weather you can always play. In new schools, new areas which maybe don’t have a hockey tradition, it’s so much easier to start up.”

For the top-end players, meanwhile, he says it is a brilliant development tool, with far more decisions to be made in a condensed space with increased requirements on a high level of close skills.

It is for this reason that elite countries like Belgium and the Netherlands have recently ramped up their allocation of time and resources to indoor.

For the Euros the guts of Carroll’s panel took in group sessions on Saturday and Sunday in addition to most playing in Leinster league games.

Neal Glassey and John Jackson, however, were not able to attend due to club commitments in Germany and England respectively. Nonetheless, Carroll is content with the work his panel have done over the past six weeks.

“The reality is you will never have an ideal preparation, but we haven’t done too badly. But you can’t really say we are going to aim for this position or whatever because we don’t know the opposition.”

His side will feature seven Irish outdoor internationals along with long-time Dublin resident Rowland Rixon-Fuller, who previously lined out for Zimbabwe outdoors up until 2015 but has been cleared to transfer.