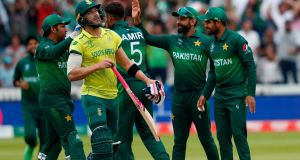 South Africa’s hopes of reaching the World Cup semi-finals are over as their nightmare tournament continued with a 49-run defeat to Pakistan at Lord’s.

The Proteas have failed to pass the group stages for just the second time and face two dead rubbers over the next two weeks.South Africa failed to reach the knockout rounds as hosts in 2003, but still won three of their six encounters.

Head coach Ottis Gibson’s men have only beaten minnows Afghanistan at this tournament, and still have to face Sri Lanka and Australia. Even three wins in nine matches would not gloss a woeful campaign, but given the Proteas’ dire form the chance of consolation victories appears remote.

Former England bowling coach Gibson’s contract expires after this tournament and is unlikely to be renewed. Faf Du Plessis may well relinquish the captaincy too.

Du Plessis hit 64 as South Africa managed just 259 for nine, failing to reach the 309 required for victory.The beleaguered 34-year-old has had to duck as many brickbats off the field as bouncers at the crease as the Proteas’ figurehead in England, and few would begrudge him having had enough.

Quinton De Kock posted 47, while Hashim Amla and Aiden Markram both failed amid another miserable top-order return for South Africa.

This latest comprehensive defeat came at the hands of an erratic Pakistan, who kept alive their own hopes of a semi-final but should not boast the quality or consistency to make it that far.

Haris Sohail’s 89, including a 71-run partnership with Imad Wasim from just 40 balls, ultimately proved the difference between the sides. Pakistan’s 308 for seven proved more than sufficient, as Babar Azam posted 69 and openers Imam Ul Haq and Fakhar Zaman both notched 44.

Imran Tahir proved the pick of the Proteas’ bowlers, taking a smart two wickets for 41 runs.

Lungi Ngidi ended on three for 64 but those figures were massaged by two soft dismissals at the death. Markram’s removal of Mohammed Hafeez raised questions as to whether South Africa should have put more faith in spin sooner in this tournament.

If South Africa’s injury-hit pace attack has proved problematic though, their batting has been little short of abject.

Wahab Riaz plundered three for 46 and Mohammad Amir two for 49, but neither man had a particularly testing afternoon with the ball.

Rarely has a South Africa side suffered for such a lack of top-order aggression, and that cost Du Plessis and company dearly once again.