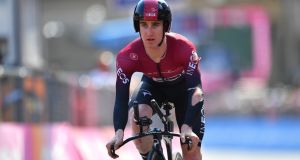 Ireland’s Eddie Dunbar in action for Team Ineos during the stage 21 team-trial at the Giro d’Italia. Photograph: Justin Setterfield/Getty Images 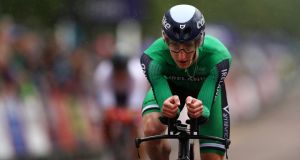 Eddie Dunbar in action for Ireland at the European Championships in Glasgow in 2018. Photograph: Dan Istitene/Getty Images 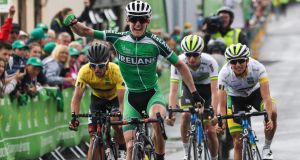 Eddie Dunbar of Team Ireland celebrates winning Stage 7 of the An Post Rás back in 2016. Photograph: Ryan Byrne/Inpho

Ask cycling analysts who the best Irish riders in history are and the same names will crop up. The trailblazer was Shay Elliott, who in the 1960s won stages in the three Grand Tours and was the first Irishman to don the yellow jersey of the Tour de France. Two decades later Seán Kelly took multiple Classics and one Tour of Spain, while Stephen Roche equalled Eddy Merckx in winning the Tour, the Giro d’Italia and the world championships in one staggering season.

More recently, Roche’s nephew Dan Martin scooped the Liège-Bastogne-Liège and Il Lombardia Classics, and two stages of the Tour de France. Others such as Martin Earley, Nicolas Roche and Sam Bennett have also shone, but Elliott, Kelly, Roche and Martin are the clear standouts.

A new name now looks destined to join them. Last month Eddie Dunbar lined out in his first Grand Tour, completing the Giro at 22 years of age. He made a big impression: in fact, his three-week debut was the third best in the history of Irish cycling. Way back in 1978, Kelly won a stage in his first Tour de France and finished 34th. Roche was 13th in his first Tour in 1983 and took second and third on stages. And now, over three decades later, Dunbar approached those distinguished debuts when he nabbed third on a stage of the Giro en route to 22nd overall.

“The whole experience was incredible,” Dunbar tells the Irish Times. “I was really happy with the way my body reacted. I recovered well. The only time where I really suffered for most of the day was on the last mountain stage. I took that as a real positive because I thought to myself, ‘there are guys who were like this one week ago.’

“As a whole, the race was a massive learning curve. I took a lot from it. And I’m very content with how my body handled three weeks of racing.”

Dunbar was a late call up to the race, being included in the Team Ineos squad after Egan Bernal broke his collarbone. That unexpected start, plus the fact that he had to support the designated leaders, puts his 22nd overall in context. Had he been on another team with more personal opportunities, he could and would have been closer to the top 10.

Dunbar did get freedom at certain points. One was the 158-kilometre stage to Pinerolo on day 12, where he was part of a long-distance breakaway move. He was one of the most aggressive on the arduous Montoso climb, and was subsequently the only one able to bridge up to Italians Gianluca Brambilla and Eros Capecchi when they went clear on the short, steep San Maurizio ramp with three kilometres remaining.

Dunbar is normally a rider who does more than his fair share in a break, but he deliberately held back to try to win the sprint. However, just before the line two other Italians, Cesare Benedetti and Damiano Caruso, got up to them and snatched first and second.

“Hindsight is a great thing,” says Dunbar. “In the race I made a decision in that final and I stuck with it. I have been known in the past to drag people to the line. If there were a couple of guys with me, I was always one who might finish last because I had nothing left for the sprint. So I took a gamble this time.

“If those two guys hadn’t caught us, it was the right option. I was always taught from a young age not to look back. I didn’t realise the two guys had caught us. But you live and learn. It was a great learning experience. At the time I was quite disappointed with third but, looking back now, it wasn’t so bad.”

Dunbar grew up in Banteer, Co Cork. Despite his slight build he played rugby for many years. His father Eamonn coached in the sport, but he deliberately kept his distance. “Whenever I was playing rugby, he coached either the lower or higher age groups,” Dunbar explains. “He never coached the one I was in. That was always good because nobody could say ‘he is in the team because his father coaches him.’

There was a similar hands-off approach to cycling, with Kanturk man Dan Curtin mentoring him. “Dan coached me, my father never used to interfere,” Dunbar continues. “He let Dan do what he wanted. Some fathers interfere . . . they spoon feed their children, but my father never did that with me. He would back off. It definitely motivated me to do it for myself.”

Curtin remembers a young Dunbar as an incredibly focused person. “You hadn’t to wait for Eddie for anything, whether it was coming to training, or going away with a team to the races. If we were staying somewhere overnight, Eddie would be down first thing in the morning with everything ready. He had his bottles done himself, he had his food ready. He would be sitting there in the minibus ready to go, whereas with other fellas you would be constantly chasing them. You’d be telling them to be in bed at nine or half nine; Eddie would already be in his.”

That singular focus helped Dunbar to thrive physically, to keep coming back for more even when others profited from his willingness to drive breakaways. And that focus also served him well when his father died of a progressive kidney disease when he was 13 years of age.

Other teenagers might have gone off the rails, but Dunbar kept it together. He continued to work hard and used the memory of his father to spur him on. “I used to watch cycling with him and he loved the Tour de France. That is probably what drives me a bit.”

Success grew over time. He is the only rider in the 41-year history to win two editions of the Junior Tour of Ireland. He pulled off an audacious 100 kilometre breakaway in the 2015 Cote de Picardie, an Under-23 World Cup event. He opened a huge lead over the peloton and although the bunch finally managed to bring him back before the finish, his exploit earned high praise from Merckx, cycling’s best-ever rider. He also won the awards for the mountains and intermediate sprints classifications and was named most aggressive competitor.

The following year Dunbar won a stage and placed fourth overall in the An Post Rás. Eleven months after that he dominated the Under-23 Tour of Flanders, soloing in almost a minute clear. That ride earned him a pro contract with the Irish Aqua Blue Sport squad and, while it collapsed in August of last year, the top-ranked Team Sky [now Team Ineos] snapped him up.

Dunbar made his Grand Tour debut with them last month and after impressing in Italy, believes he will step up to a new level as a result.

“Most guys you talk to will say that a Grand Tour gives you the strength to turn an extra gear,” he explains. “And that’s certain with the length of the stages in this year’s Giro and the hardness of it. I think it is important to rest now and absorb the workload done over those three weeks. For sure it will make me a better athlete.”

Dunbar returned to action last Thursday in La Route d’Occitanie in France, a race previously known as the Route du Sud. He took a superb second place on the opening stage, being the only rider able to stay with world champion Alejandro Valverde on the uphill finish. He finished fifth overall and was second in the best young rider classification. Later this week. Later this week he will target the Irish national time-trial and road race championships, which are important targets for him. But longer term, he’s gunning for success in the biggest events in the sport.

“I just want to become the best athlete I can be, really,” he says. “To get the most out of myself. I am not sure what that is going to be yet, but hopefully that would be staying at the top level of my sport for a good few years and winning some good races. That is my aim. Just to try to improve every year and see what comes of it.”

Curtin is more specific. “I think Eddie is good enough to aim for the Tour de France title in the future. And I think he can definitely win the Vuelta a España or a Giro d’Italia. He has it inside his head that he wants to win a Grand Tour . . . and I think he can.”

Armagh finish strong against Clare to return to top tier 18:30
Canter and McGowan pull away from the field at Italian Open 18:29
Ireland’s Garry Ringrose suffers suspected broken jaw 18:22
Dan Martin goes down but survives Vuelta spill unscathed 18:14
Ireland get the job done against Italy to keep alive Six Nations hopes 18:05
Here is your handy guide to sport on television this week