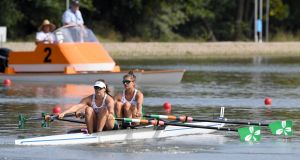 Aileen Crowley and Monika Dukarska were part of a four-strong crew which finished fifth in the B Final in Poland. Photograph: Detlev Seyb/Inpho

Ireland’s new women’s four and pair tested themselves in Olympic events at the World Cup Regatta in Poland - and discovered how high the standard is. The four finished 11th overall and the pair 12th.

“I think it’s been a tough event. Definitely, it was much tougher than the European Championships,” said Ireland high performance director Antonio Maurogiovanni. Australia, New Zealand and the United States were all engaged - some with more than one crew in Ireland’s events.

“For the girls, I think they did a great job. The intent was there. Of course the results just reflect the level of experience. That is something we can’t speed up!

“This squad is a development squad, in some ways. We are trying to give them as many opportunities as possible to develop experience to then eventually prepare the boats for Olympic qualification.”

The Italian said that a detailed analysis would be made to decide which women’s sweep crew or crews - if any - would go forward to the final World Cup and World Championships, “or maybe just postpone everything to next year”.

In Sunday’s B Finals, the four of Tara Hanlon, Monika Dukarska, Aileen Crowley and Emily Hegarty contended in the early stages. But they were not in the picture at the end as Britain Two pipped Germany to win, with Ireland fifth. The wash from the TV launch gave Ireland choppy water in the last 400 metres.

The pair of Claire Feerick and Eimear Lambe took sixth in their B Final, a race won by United States Two. Ireland closed up well coming to the line and were just one second off fourth place.