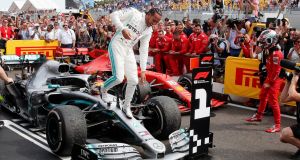 Lewis Hamilton was almost unchallenged after the first corner of the French Grand Prix and put in a dominant performance to seal victory. With his Mercedes teammate Valtteri Bottas taking second, the team ensured both another one-two finish and their eighth consecutive win this season. Ferrari were effectively in a different race. Charles Leclerc managed third in front of the Red Bull of Max Verstappen with Sebastian Vettel in fifth, having started from seventh on the grid.

Hamilton led from pole with a consummate if not entirely thrilling display of control from the very front and did not surrender his lead throughout.

He finished a full 18 seconds in front of Bottas, with Leclerc 19 seconds back. Vettel secured the fastest lap of the race.

Hamilton’s 79th career victory is his second in a row at Paul Ricard.

Mercedes, who took their first F1 win here at the French Grand Prix in Reims with Juan Manuel Fangio in 1954, were in control all weekend and Hamilton was able to turn the dominance he showed in qualifying into a fearsome performance in race pace.

Hamilton now has six wins from eight meetings this season, including the last four in a row. That more are to follow this season seems inevitable. He has extended his lead over Bottas to 36 points in the world championship, while Vettel has fallen 76 points back.

The initial charge Bottas made to open the season looks to be faltering in the face of Hamilton once more coming in to his own. After qualifying Hamilton suggested he would only be getting stronger and on this form it is hard to disagree with him. He did not allow his teammate a look-in across the 53 laps in another display of precision driving.

For Vettel, who qualified poorly, and Leclerc, they managed to maximise what they could with a car that was demonstrably not as quick though the corners, despite making time back in the two big straights. As things stand, as Hamilton suggested on Saturday, the title fight is at best now a two horse race between the British driver and his teammate.

Hamilton held his lead from Bottas into turn one, with the Finn just holding off Leclerc to maintain second. Verstappen had a mighty look at Leclerc into turn two but could not quite get his nose in front and the front four held their grid positions to the end of the first lap.

Carlos Sainz went round the outside of Lando Norris to take fifth through turn one but the two McLarens were unable hold Vettel behind them for long. Vettel took sixth on lap five and set off after Sainz, passing him for fifth on lap seven, putting him eight seconds behind Verstappen in fourth.

Hamilton opened up two seconds on Bottas by lap seven, with the gap to Leclerc already at five seconds. The British driver was in control putting in a series of fastest laps which Bottas could match but without any form of pace advantage that would give him a chance to challenge.

Hamilton had looked serene but informed Mercedes he believed his seat was broken on lap 14. The issue appeared to have no effect on his times as he continued to set more fastest laps, extending his lead over Bottas to four seconds by lap 17.

As the pit stop window opened Verstappen was the first of the front runners to take the hard rubber on lap 21. Ferrari covered his stop a lap later bringing in Leclerc, by now focused on maintaining their third place.

Mercedes kept their drivers out however with Hamilton still confident in his tyres, as his strong lap times continued to show. Bottas came in first on lap 24 and Hamilton followed him a lap later.

Vettel was going long however and stayed out and Hamilton emerged just in front of the German, who finally pitted on lap 26 after a lock-up was causing him vibration.

Mercedes were in a class of their own out front while both Ferraris were focused on trying to beat Verstappen’s Red Bull. Leclerc had the lead over the Dutchman and Vettel was five seconds back, positions they would hold to the close.

Hamilton however was in no mood to relinquish any pressure and pumped in a series of quick laps. His lead to Bottas was an almost unprecedented 12 seconds by lap 34. A late VSC to deal with a loose bollard added no drama to the finale, the victory that followed was as assured a win as he has taken all season.

McLaren finished with Carlos Sainz in sixth while Britain’s Lando Norris, who had looked on for seventh until stymied by hydraulic problems could manage only tenth. Daniel Ricciardo in the Renault was in seventh, with his teammate Nico Hülkenberg in ninth. Kimi Raikkonen in the Alfa Romero was in eighth. - Guardian