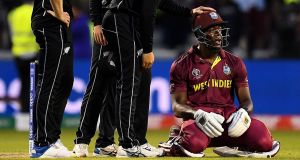 Carlos Brathwaite of West Indies is consoled by New Zealand players after he was caught on the boundary to end the World Cup game at Old Trafford. Photograph: Clive Mason/Getty Images

Carlos Brathwaite almost engineered another unlikely triumph for the West Indies but fell agonisingly short against New Zealand, who moved to the top of the World Cup standings after a thrilling five-run win at Old Trafford.

Brathwaite, who rose to prominence with a barrage of sixes against England in the 2016 World Twenty20 final, came to the crease amid a cluster of wickets falling as the Windies lurched to 164 for seven in pursuit of 292.

But under the Old Trafford floodlights, Brathwaite bludgeoned nine fours and five sixes in a scarcely-believable 80-ball hundred, only to hole out to Trent Boult in the deep as the Windies were all out for 286.

The all-rounder sank to his knees in despair after being dismissed for 101, his maiden international hundred in vain as the West Indies slipped to a fourth defeat of the tournament, which almost certainly ends their interest.

The Kiwis, meanwhile, were given an almighty scare after Boult’s four for 30 followed Kane Williamson shepherding his side to 291 for eight with a masterful 148 from 154 balls on a challenging surface.

It was the New Zealand captain’s second ton in the space of four days after orchestrating their win over South Africa – although Brathwaite’s effort rendered the knock a lesser headline.

The broad-shouldered all-rounder found willing support in Kemar Roach, Sheldon Cottrell and Oshane Thomas but did the bulk of the scoring, amassing 25 runs in the 48th over off Matt Henry.

Just as it seemed he would achieve the unthinkable, another big swipe that would have sealed the unlikeliest of successes off Jimmy Neesham found only the hands of Boult, who took the catch and stopped his momentum taking him over the boundary.