Heroic insanity: When Michael Dunlop raced home in memory of his father

After Robert Dunlop was killed in practice, his two sons defied organisers to race 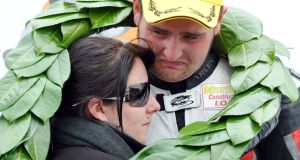 Michael Dunlop is comforted on the podium by his girlfriend Jill after winning the 250cc race at the North West 200 just two days after his father Robert was killed during practice for the same race. Photo: Stephen Davison/Pacemaker

It was no different from the usual race start. He took off down the road, his feet skiing along the ground, others leaning forward to stop the front wheels from lifting.

If anything Portstewart’s snarling grids are like the gates opening at the Curragh and the froth of mad horses barrelling out, eyes blazing. Within seconds the riders will have aligned their bikes as the mental algorithm of the circuit in their heads fires up, thoroughbreds in their own ways tipping along at 200 mph.

In 2008 it was no different. It was a practice session and Robert Dunlop was on his 250cc racing bike on a Thursday evening at the North West 200. At one of the faster stretches of road going into the bend at Mathers Cross, the 47-year-old five times world Formula One TT champion and winner of 26 races at the Isle of Man TT, inadvertently hit the front brake of his bike when his engine seized at over 150mph.

The harsh braking hurled Dunlop over the handlebars and a rider he had just overtaken ran over him before he also crashed and suffered severe injuries. Robert died as a result, joining his brother Joey who was killed in a crash while competing in a race in Estonia in July 2000.

It would seem blindly dispassionate and lacking in empathy to see these tragedies as anything other than the opposite of what sport is supposed to be – a pastime, an enjoyment, a desire, a devotion, a fascination, a challenge.

Because of the tragic nature of the calamity and the personal human cost, such events can be firmly placed outside any list of least favourite moments in sport. They seem so materially different.

In football few incidents have been worse than Heysel, Ibrox or Hillsborough. In Formula 1 there is Ayrton Senna’s death in 1994. And what would make Robert Dunlop’s death worse than his brother’s? Or that of his son William, who would be killed in the Skerries 100 event 10 years after his father?

But there are always moral dilemmas due to the high levels of danger and the sports ethicists can work out the precise measure of what is too much risk. Whether racing between the hedges, climbing up sheer rock faces without safety ropes, or base jumping from buildings, it seems a matter of choice.

But less than two days after Robert was killed at Mathers Cross, his sons, William and Michael, broke with everything that seemed sensible or reasonable and against the insistence of race officials muscled their way onto the grid in what was one of the most disquieting episodes in racing history.

“I think it’s right that the race is going ahead tomorrow. My dad would have wanted that,” William had said. “I know that he would have wanted me to ride in the 250 race. There will be other people who will think that it’s crazy and who wouldn’t want me to do it, but I would like to.”

That the ending was almost scripted like a Hollywood movie allowed all concerned to breathe a sigh of relief as Michael went on to win the race after William’s bike suffered a mechanical failure and didn’t get off the grid.

But at that moment the scene was of two bewildered young men, traumatised and trying to outrun their grief and fear through racing. In an irrational and dangerous decision it seemed then they were trying to defy a growing family legacy of tragedy.

To compound matters teenager Michael and older brother William had been on the circuit riding their bikes on the Thursday evening and were a little bit behind their father. They then came across him dying or dead on the road and stopped.

“I held his hand and prayed he’d be all right,” said Michael.

Few people believed the two would or should take up their positions on the grid for the first race on the Saturday in the 250cc class. But as they appeared into view, shielded by friends and mechanics, a ripple of applause from the nearby stands seemed unconvincing and hesitant.

There was no small amount of confusion and shock among the crowd as the brothers appeared with their racing machines and went through the motions of actually preparing to compete. This despite a meeting that morning, where the race officials had expressly decided not to permit either of the brothers to race.

While there was some protest by stewards that Michael and William were openly defying the decision, there was also the potential for an unseemly stand-off between an iconic racing family and their supporters with the local organisers.

Michael ducked down behind his machine with a large umbrella over his head, a sombre William appearing more openly defiant as officials and team members hugged them and whispered words in their ears.

For many though, there was a frisson of incredulity as to what on earth was going on in the heads of the poor lads. Thoughts also turned to the safety aspect and whether the distressed sons were in a frame of mind to be able to make the kinds of split second decisions they must to keep themselves, the other competitors and the fans that lined the route between Portstewart and Coleraine safe.

There was also the consideration of the Dunlop family and the unthinkable happening, that one or other of the two would have an accident before their father had even been buried.

That would take place the next day when they turned to the heartbreak of shouldering the coffin into Garryduff Presbyterian Church near Ballymoney, where Martin McGuinness and Ian Paisley would also pay their respects.

There are always different thoughts shooting through minds in high level sport. The best athletes can control how they least affect them or direct them for their own purpose. Michael took off and did just that, ripping around the narrow roads to fatefully crash home on an emotional wave.

Pugnacious and aggressive in his riding as he has always been, when he crossed the finish the line almost 36 miles later the worst moment had become possibly the best.

In a marinade of bereavement, a young man dangerously expressing himself in the only way he knew how, it was a ride of heroic insanity. This time it had paid off.