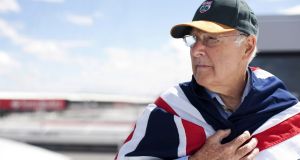 Johnny Herbert was trying to explain to Simon Lazenby and Damon Hill just how thrilling it had been to get the opportunity to drive one of Stirling Moss’s old cars around the Silverstone track, but all the while his mask kept slipping down his face and he was having to shove it back up repeatedly to re-cover his nose and mouth.

By now Damon, sitting immediately to his right, was looking a little anxious, leaning a bit away lest any form of spray land on him. It was at this point that Simon felt it was time to intervene.

“Johnny? Do you know why your mask keeps slipping down?”

And which one of us hasn’t been there, assuming the curly bit was for the chin and not the nose?

Poor Johnny looked morto, but Sky’s mask-fitting department sorted him out during the break and he was able to resume chatting about those 1950s cars which might have looked like knocked-over wheelie bins to some of us, but to Johnny they were things of beauty.

And it was nostalgia central at Silverstone over the weekend where they were marking the 70th anniversary of the track staging the first ever World Championship race, the peak trip-down-memory-lane moment coming when Simon told us he had a very special guest on the phone. It was only the legend that is Murray Walker! All 96 years of him!

“How are you keeping,” asked Simon.

“Ah, I’m alright, I have been better,” said Murray. “I’m a bit of a doddery old man physically, but I think I’ve still got my marbles.”

He has too, vividly recalling details from that first race 70 years ago when some of us couldn’t tell you what we had for breakfast.

Murray would, no doubt, have doffed his cap to the star of Saturday’s qualifying, Nico Hulkenberg, the poor divil whose name is never mentioned without reference to the fact that he has failed to have a podium finish in 177 attempts.

That might be why he wore both a mask and sunglasses when he spoke to Rachel Brookes, meaning that for all we knew it could have been Franz Beckenbauer sitting there.

Hulk, as he is known, was only a late call-up for Silverstone after Racing Point’s Sergio Perez’s positive Covid-19 test.

“I was sitting in a cafe in Cologne having some pastry and a coffee when I got the call,” he told Rachel. “I’m like, oh really, you want me to leave my pastry? I love my pastries! Two hours later I was on a plane to the UK.”

Not even thoughts of that abandoned half-eaten pastry could distract him on Saturday when he finished third in qualifying, the fella on the ecstatic side.

“There’s a big smile on my face,” he had to tell Paul di Resta while pointing at his mask. “It was just head down, full beans, and give it whatever I had.”

Come Sunday, alas, Hulk had to settle for seventh, Max Verstappen giving the race the most beans by winning it for Red Bull when those who know about these things assumed the winner would be driving a Mercedes.

“You must have sweaty hands, don’t forget to sanitise,” his people advised him over the radio during his final lap, although, it being Red Bull’s first Silverstone triumph since 2012, you’d guess they’d have licked his hands no matter what was on them.

And nothing would stop the fella, even the radio request mid-race that he take it steady to preserve his tyres.

“This is the only chance to be this close to the Mercedes, I’m not just going to sit behind like a grandma,” he replied.

That, of course, was rude to grannies, as Martin Brundle pointed out to him after.

“They can be pretty speedy,” he reassured him. Maniacs, some of them.

But Martin was chuffed that someone had managed to put it up to Mercedes. Earlier himself and David Croft had been doing a bit of sighing about their dominance, David wondering aloud if “Mercedes should have to do an extra 100 metres in qualifying just to even it up a little bit”.

Martin was having none of that.

“I enjoy watching Usain Bolt,” he said. “But it doesn’t mean to say you have to put a concrete boot on one of his legs, it’s up to the others to close the gap.”

You could say the same about Lionel Messi, of course. That goal against Napoli on Saturday? Ah lads.

“Well, he never fails, does he, to disappoint, this man,” said Martin Keown in, eh, tribute.