Canned clapping at the Crucible? It’s weirder it’s getting 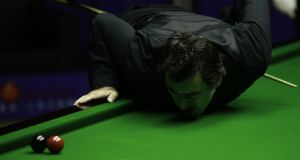 Between the lady singing Abide With Me on the roof of an empty Wembley Stadium and the canned applause at the World Snooker Championships, it’s weirder it’s getting.

The thing with the fake snooker clapping, which sounds more akin to someone dropping several saucepans on a tiled floor, is that unlike other sport’s canned applause, the players can actually hear it.

So, little wonder that the likes of Yan Bingtao are feeling discombobulated, the fella walking in to the Crucible for his game against Elliott Slessor on Sunday morning to the strains of Queen’s ‘Don’t Stop Me Now’ and waving at the crowd even though there wasn’t one.

Martin Keown had a similar moment at Wembley when he referred to the rising tension around the stadium during the FA Cup final before, possibly after a nudge from Glenn Hoddle, adding: “But there’s nobody here, of course.”

Meanwhile, back at the snooker, Ronnie O’Sullivan thought there was no one there either so got the fright of his life when there was a sudden eruption of fake applause, like it was coming from the ghosts of the Crucible’s pre-lockdown past.

The ref had to explain that it was for Matthew Stevens who had just scored a century on the other side of the divider, but Ronnie still nervously eyed those empty seats. If he hadn’t been so shaken he might have done better than take a 6-0 lead in an hour with breaks of 101, 85, 115, 74, 88 and 76. As a Tweeter called Lawrence put it, “why can’t all life just be watching Ronnie O’Sullivan play snooker with occasional breaks to wash, eat, etc?”

Anyway, the only thing that felt even half normal all week was having Ted Walsh back at the racing and questioning the brainpower of random horses - Felix Desjy is “a big wooden-headed so-and-so, a mutton head” - and offering analysis that to us uninitiated may as well have been conducted in Swahili.

“If you give a horse a chance in a race to run on, he will run on. Most horses will pass horses that have had their shot. Mahatma Gandhi, you’d catch him coming out of the yoke if he took his time on him far enough, d’you know what I mean?”

No matter, the main thing is that the Galway Races went ahead, even if there were no spectators. Hugh Cahill tried his best to convince us that the atmosphere was grand. Ted? “It’s like being in an auld graveyard.”

Wembley was much the same, a bit on the eerie side, the loudest cheer in the stadium when Pierre-Emerick Aubameyang got what proved to be the winner coming from Ian Wright up in the BBC gantry.

A fab goal it was too. “He’s almost looking through a book of finishes, flicking through the pages, what shall I do with this one,” said Keown over on BT, attempting - but not entirely succeeding - to sum it up.

The late Richie Benaud, could, of course, sum anything up, him being the maestro, his disdain for tailenders’ inability to bat always a special delight - the highlight, perhaps, “Glenn McGrath dismissed for two, just 98 runs short of his century”.

Even he, though, came close to being lost for words when Australia managed to lose the Ashes 39 years ago, as we were reminded in the BBC’s ‘Botham: The Legend of 81’.

And in the week that it was announced that Sir Ian Botham would enter the House of Lords, it was a right hoot hearing him described as “anti-establishment”. But that he was back in the day, in a cricket-ish kind of way.

And in that series, he was, well, the Ronnie O’Sullivan of cricket, ably assisted by bowler Bob Willis of whom Stephen Fry majestically said: “Standing there looking furious, he had eyes like pissholes in the snow.”

That series, of course, fantastically featured a Lillee, Dilley and Willey, the latter’s son, lest you weren’t feeling rusty enough, putting the kibosh on Ireland’s hopes of beating England in their second one day international last week, David scoring 46 from 47 balls.

A fine couple of days for Irish debutant Curtis Campher, though, helping himself to a half century in both games. That earned him a place in Sky’s ‘Player Zone’, which is basically a Mastermind-like chair in a socially distanced spot, Campher’s specialist subject ‘Players Who Took To International Cricket Like Ducks To Water’. Although ‘ducks’ is inappropriate here.

How did he find the absence of spectators? “A bit weird,” he said. Like ourselves, then. Sort yourselves out cricket, borrow snooker’s clapping machine for next time Curtis heads out to bat.