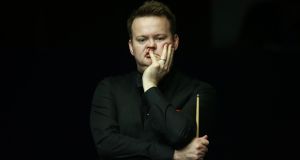 Shaun Murphy has been knocked out of the World Championship after a shock 10-4 defeat to Thailand’s Noppon Saengkham. File photograph: Getty Images

Former champion Shaun Murphy bemoaned “the worst two days of my snooker years” after crashing out of the World Championship in a 10-4 defeat to Thailand’s Noppon Saengkham.

Saengkham exploited a series of uncharacteristic errors from Murphy as he built on a 6-3 overnight advantage to become only the third Thai player to win a match in Crucible history.

Afterwards Murphy stressed his performance had not been affected by the recent sudden death of his former manager and mentor Brandon Parker, whose funeral he attended in the Algarve last month.

Murphy told BBC Sport: “I was very much below par across the whole match — probably the worst two days of my snooker years came together at the worst possible time.

“My form has been good this season with two titles and other finals, so this was a shock to me. And I can say that the build-up to the tournament had no impact. I came here wanting to honour Brandon Parker’s memory.

“You dream of winning the title and dedicating it to him and things like that. But I would never dishonour him by saying that has caused me a problem.”

Saengkham, who admitted he barely slept on Monday night, showed no sign of nerves as he produced breaks of 53 and 63 to extend his advantage to five frames.

A rare missed red enabled Murphy to temporarily reduce the deficit, but further breaks of 60 and 74 either side of the mid-session interval saw Saengkham ease home.

Saengkham estimated up to one million people will have watched the match in a country whose appetite for snooker was largely cultivated by the exploits of former world number three and two-time Crucible semi-finalist James Wattana.

He said: “James taught me everything — how to come here and speak the language. He taught me how to get through because for an Asian player to come to the UK is difficult.

“I felt a lot of pressure but I just tried to concentrate on the table and not think about all those people watching me. For the last three or four days I have turned my phone off and not done anything on the internet. If I turn my phone back on it will be too much pressure with all the messages.”