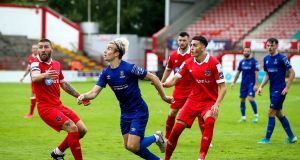 Shelbourne take on Waterford at Tolka Park - you can stream the rest of the League of Ireland season for €55. Photograph: Tommy Dickson/Inpho

In all my 24 years of existence, I have never seen such a welcoming for streaming games. Here’s the thing about technology, when it’s used to generally help the wider community, the results are invaluable. Granted, there are times where I’ve almost thrown my laptop out of the window due to rural Ireland Wi-Fi speeds, and I’ve also seen a few eyebrows raised when my ginormous TV is switched off, and I’m sat in the corner hunched over my laptop, screaming at a tiny 13-inch screen.

But, over the bank holiday, I was never so grateful for my beautiful gold shiny laptop, which brought God knows how many games to my little sports room. From switching to the Cork senior hurling championship and having other club games around the country with the FA Cup on in the background, some could say I was living the dream, or else I became a hermit.

That’s the thing about the internet, it’s here, and it brings realities to you that you would never have known before. I never thought I’d actively take time out of my day to watch a club game six counties away, but that’s where we’re at.

On top of that, WatchLOI started over the August Bank Holiday, filling a much-needed void unless you are a Cork City fan, who really likes the misery. The WatchLOI service has been put together by the FAI, RTÉ, and GAAGO, and RTÉ will have cameras and commentary teams at every game all the way to the end of the season. Like the beginning of every streaming service, there will, of course, be hiccups and stumbling blocks, but, overall the standard was relatively good, and for €55 for the rest of the season (roughly a euro per game) it’s great to see the national league get a standalone platform in an already foreign league-dominated market.

Throughout the whole weekend, however, one thing I did miss was the coverage of women’s sports. Of course, I was able to accumulate some information by checking social media (I know it’s down on the list of essential stuff during a pandemic, but clubs and teams should have no excuses if their social media isn’t active and up to date), but being able to watch teams from all sides of the country, and not one of them being women, was a tad bit depressing.

But, alas, I’m not that surprised. The NWSL was the only league going on in America, and the only photo that made it to mainstream world media was of Julie Ertz and Casey Short during the national anthem. A great picture, sure, but it overrides important information like the fact the Houston Dash won the whole series. It wasn’t even powerful enough for one outlet who wrote a timeline of leagues returning, only to entirely skip over the NWSL.

In other words, things really feel like they’re a bit stuck. And I know once this is published the responses and critics will repeat the same tropes. The most popular include: women athletes just aren’t as good or fun to watch. If they actually had talent, people would tune in. Of course, people would care. Obviously, games would be on TV, if the level of skill was the same as it is on the men’s side.

And yet, it is absolutely everywhere across sports culture and is becoming more prevalent as Covid-19 rips up the rulebook and forces sporting organisations and media to change. Sure, we shouldn’t feed the trolls, because they don’t matter. But their sheer outward hatred still reflects upon a society that has allowed women’s sports to fall by the wayside.

Fans looking out for games have been told numerous times money can’t really be invested, but it still hasn’t stopped organisations ripping up the rulebook to accommodate the Turkish League on BT Sport. The funny thing is, despite nobody caring, plenty of records around the women’s game have been broken, and various issues are being tackled, from incredible viewing figures from CBS on the NWSL to thought-provoking articles on why the IRFU aren’t selling the women’s national jerseys and what is possibly next for the 20x20 initiative.

Imagine the audience reach and viewership figures events would have, especially in this current climate. Imagine the boost everyone would get seeing back-to-back All Ireland champions Mourneabbey face stiff competition in Cork or how Galway are planning on retaining the Camogie All Ireland.

If records are being broken in such a toxic and male-dominated culture, imagine what could happen if women’s sports became equitable and there was equal access for all. In so many ways sports culture, from fans, to the lack of coverage, to sexism, is set up for women’s pro sports to fail. If the rulebook can be ripped up once, it certainly can be ripped up again.