Trump tips Wilson to win as O’Sullivan sees off Williams 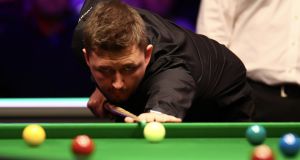 Judd Trump backed Kyren Wilson to succeed him as world champion after becoming the latest victim of the so-called ‘Crucible Curse’ in Sheffield.

Wilson’s 13-9 quarter-final win means Trump becomes the 18th first-time winner to fail to retain the crown since the event moved to its present venue in 1977.

Trump said: “I think if Kyren plays like that he will be very tough to stop. His long potting was brilliant over all three sessions and he is my pick to go on and win the title.

“I think it would be brilliant for the game if I can have someone of my own age group to compete against for the next 10 or 15 years.

“He has taken a step up from when we played before and now it is all about me putting my foot back on the gas and get ready to try to improve to reach where he is at.”

Trump had shown signs of stirring from his 10-6 overnight deficit as he fired three breaks over 50 in the first four frames on Tuesday to reduce the deficit to just two.

But Wilson moved one frame from victory after winning the 21st frame in two visits then seized on a missed long red by Trump to round off victory in style with a break of 104.

Wilson, who returned to the last four for the first time since his 2018 defeat to John Higgins, hailed the prospect of continuing to create the kind of rivalry which could one day sit alongside the Crucible greats.

Wilson said: “To make the one-table set-up is a big achievement and to get there by beating the defending champion and world number one makes it even sweeter.

“There’s no bitterness there, I’d just like to achieve what he’s achieved. I’m striving to get there and Judd’s already made it. For me to get there now I have got to beat the likes of Judd.”

Wilson will face Anthony McGill in the last four after the Scottish qualifier withstood a spirited fightback from Kurt Maflin to triumph 13-10 and reach his first Crucible semi-final.

Ronnie O’Sullivan erased a five-frame deficit to beat Mark Williams 13-10 and set up a semi-final meeting with Mark Selby.

O’Sullivan had reeled off four frames in a row to haul back to level from 8-4 down and went ahead for the first time in the match when breaks of 61 and 65 sent up 11-10 in front.

His fifth century of the match — a 133 total clearance — moved O’Sullivan within one frame of victory and he sealed a 13-10 win on a re-spotted black in a remarkable end to the 23rd frame in which he had previously missed a simple blue for the match.

But O’Sullivan was scathing of his performance and told the BBC: “I’d lump on Selby because I don’t expect to beat him, and that’s not me trying to take the pressure off, I don’t need to I’ve got nothing to prove.

“Just as a bit of insider information from me... I don’t know how anyone can beat him.”

Earlier Selby completed a 13-7 win over Neil Robertson to reach the semi-finals for the first time in two years and admitted he had had doubts over whether he would ever return to the one-table set-up.

Selby suffered a crisis of confidence in the wake of his third world title win in 2017, losing his world number one ranking as he won just two tournaments in the following two years and crashed out in the early stages in Sheffield.

But the 37-year-old, who was forced to battle through the first two rounds against Jordan Brown and Noppon Saengkham respectively, believes the manner of his win over fellow former champion Robertson indicates he is back to somewhere approaching his best.

“I was happy with my performance against Neil. I felt if I got a chance I could score, and my safety play was back up with how it was a few years ago.

“As a match-play game it was right up there with my best performances. I can see the changes already, especially in my body language, so long may it continue.”

Selby resumed with an 11-5 overnight advantage and swiftly moved one frame away from victory by taking his first chance with a break of 91.

He moved to the verge of victory with a 56 break in the next frame but after missing a red to the middle, Robertson embarked on a gutsy comeback.

The Australian chiselled out the next two frames and looked set to take a third before a simple missed black allowed Selby in to wrap up victory at the second attempt.