Conor McGregor could address US Congress in fighters’ rights bid 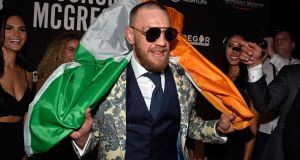 Mixed martial arts champion Conor McGregor could speak in the United States Congress to help with a campaign to extend the legal protections enjoyed by boxers to MMA fighters, according to Congressman Markwayne Mullin.

Mullin, a former fighter, is trying to get a bill passed which would extend the “Ali Act” - which protects the rights of boxers - to MMA.

He says McGregor, who lost a multi-million dollar boxing bout against Floyd Mayweather last month after switching fighting codes, may help him to do it.

“We have been told by his team that he (McGregor) was going to come to the (Capitol) Hill to talk about this,” Mullin, a Republican from Oklahoma, told Reuters in an interview.

Enacted in 2000, the Muhammad Ali Boxing Reform Act is intended to protect the rights of boxers and to help US states to regulate the sport and maintain its integrity.

Among the safeguards offered to boxers by the Act are protection from “coercive contracts”, the establishment of an independent ranking system and the banning of promoters from having a “direct or indirect financial interest” in the management of fighters.

Mullin is pressing for another hearing on the Ali Extension Act in September or October, yet as both a de facto governing body and a promoter, the UFC, the most high-profile and lucrative MMA organisation, is resisting the move.

UFC’s chief operating officer Lawrence Epstein told Reuters that the body was already “exceeding the requirements when it comes to health and safety and contracts”.

While the UFC treats all of its fighters as “independent contractors” rather than employees, they are not free to fight for other promotions.

Nor can they undertake certain commercial activities related to their fighting careers without the UFC’s permission, a situation many critics say is too restrictive in what can be a short and very tough career.

McGregor, for example, still had to get the go-ahead from the UFC and agree to share revenue with the body before signing to fight Mayweather in one of the richest boxing bouts of all time.

MMA fighters often complain that their UFC contracts limit their earnings, pointing to the exclusive outfitting deal with Reebok, which prevents them from wearing equipment from any other manufacturer when fighting.

They are also not allowed to include logos from other sponsors on their clothing or to display banners in their corners, as is normal in other promotions.

This has led to a considerable drop in income for many fighters, with former women’s bantamweight champion Miesha Tate estimating in a 2015 interview that the terms of the Reebok apparel deal caused her to lose 80 to 90 percent of what she previously earned in sponsorships.

There have also been complaints about lower-ranked UFC fighters being awarded title bouts simply based on their ability to sell television pay-per-view subscriptions, which is a core element of the UFC’s income in the United States.

Despite losing in the 10th round against Mayweather, McGregor has indicated that he may box again, and a handful of other UFC fighters have expressed an interest in lucrative one-off boxing bouts.

Legal experts have been discussing in the media whether McGregor is now a boxer in the eyes of the law, and thus entitled to the protection of the Act, or if he will lose that protection when he returns to the UFC.

Epstein told Reuters that the UFC does extensive work on fighter safety and welfare and is as transparent as possible when it comes to contracts.

He rejected the notion that match-making based on independent rankings could improve the sport.

“We have been successful for one reason and one reason only - we put on the fights the fans want to see,” Epstein explained.

“That’s where we have a problem with what Congressman Mullin wants to do.”

Mullin says that a transparent rankings system would allow fans and fighters to see who is in line for a title shot.

“(American football quarterback) Peyton Manning could never have made it in the UFC, because he was a great athlete but he wasn’t a good self-promoter,” Mullin explained.

“We want to make it a professional sport where a guy who is not a loud-mouth can still climb the ranks and eventually have that title shot - right now, you can’t get a title shot unless you sell a lot of tickets.”

The current UFC model seems to suit the 29-year-old McGregor, who trash-talked his way to the top of the UFC tree, becoming the first fighter to hold two world championship belts simultaneously in November 2016.