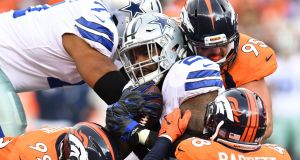 Last year the Dallas Cowboys were the story of the NFL with a star rookie running back rumbling behind a dominant offensive line, winning games because their rookie quarterback never seemed rattled by any situation. They were so good with Ezekiel Elliott running the ball and Dak Prescott throwing it that franchise quarterback Tony Romo was chased into an early retirement.

The future belonged to Elliott and Prescott.

But there always lingered a question about the Cowboys’ new plan. What happened if the run didn’t work? What if Elliott wasn’t there and Dallas would need Prescott to win the games himself? On Sunday they got a glimpse and it was ugly.

In a game that no one could have seen coming, the Denver Broncos’ defence tore the Cowboys line to pieces, shut down Elliott and dared Prescott to beat them. This time Prescott could not respond. He threw 50 times but could only generate 238 yards and was intercepted twice in Dallas’s 42-17 loss to the Broncos.

While a big loss in the season’s second week to a defence like Denver’s isn’t normally the worst thing to happen to a team, the Cowboys actually have a lot to worry about. They may be about to lose Elliott for six games depending on how the US Fifth Circuit Court of Appeals rules on the NFL’s request for a stay of a preliminary injunction over their six-game suspension of Elliott for domestic violence allegations. On Sunday they got a good look at how they might be without the sophomore back.

It’s really as if he wasn’t there, rushing nine times for eight yards. This meant Prescott had to try to win the game himself, and without Elliott pushing through opposing defences Prescott did not look nearly as poised. In fact, it was as bad as he has looked since he’s been in the NFL.

“This does not paint an accurate picture of who we are,” Cowboys owner Jerry Jones told reporters after the game.

He better hope he is right. Because if this is who the Cowboys are without Elliott they are in serious trouble.

They had looked so good beating up the Giants in their season opener and while the drama of Elliott’s appeal my well be wearing on them, there was no reason to believe a performance like Sunday’s was looming.

Maybe credit belongs to the Broncos, who have one of the league’s best defences. But as aggressive as Denver might be defensively in their 2-0 start, no one anticipated quarterback Trevor Siemian doing things like throwing for four touchdowns and just one interception as he did against Dallas. They might challenge New England and Pittsburgh to be the AFC’s best team.

3 World Cup 2030 Q&A: Everything you need to know about Irish/UK bid