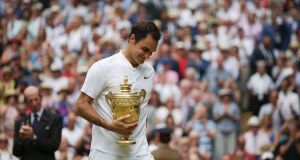 Nobody anticipated both Wimbledon finals coming down to physical malfunction. Marin Cilic’s foot against Roger Federer and the general heath of Venus Williams in her final with Garbine Muguruza left the championships falling heavily one way after two limp contests.

Cilic’s ailment was a serious blister, while Williams’ collapse in the 6-0 second set, where she displayed the iteration of fatigue, remains a mystery. The enigmatic five-time champion travels back to the US with that secret in her locker.

For Federer, the Cilic blow was just another door opening in the struggle of redrawing the record book. At 35-years-old he will greedily take younger players bodies failing them and none more than 28-year-old Cilic in a Wimbledon final.

Unlike a miserable last year, which forced him out of the game for six months, Federer’s body was working in his favour, a 19th Grand Slam title dropping his way like magic dust falling on a sparkling career. In that record shattering world there is little room for empathy.

Federer took the ‘member’s bounce’ of Cilic’s injury and exploited it mercilessly.

Goran Ivanesevic, the 2001 Wimbledon winner and fellow Croat, explained earlier in the week in his column with the London Times what it would take for his friend to beat Federer.

“If there is a lesson from last year’s match then it is when Federer is down, you need to stamp on him, kick him, hurt him some more”, said Goran.

Unfortunately for Cilic he did not get close to stomping on Federer. He earned one short look at the Federer serve in the fourth game of the first set. Federer slammed that door in his face and that’s how it remained.

The 35-year-old faced one break point in the entire match as Cilic’s foot curtailed his movement and that in turn knocked his shot making ability out of kilter. It was crushing misfortune and no way out.

With 23 unforced errors to Federer’s eight and 16 winners to Federer’s 23, the numbers were never adding up from the moment Federer won three break points in the fifth game.

Cilic clawed back two of them but spoiled a backhand into the net and Federer took advantage. A double fault from Cilic in the final game lamely handed Federer the set 6-3.

Cilic’s response was erratic and as Federer sensed the weakness he took hold of the match, racing to a 6-1 second set. From the crowd over zealously applauding Federer, when he won the first point of the match, they fell into a semi-sympathetic mode for Cilic.

They admired Federer’s march towards his record eighth title and there was a sense of privilege and wonder at his cold competitive heart hungrily hurting a hurt man.

And as the competition turned towards procession in the third set, Cilic did rise and began to coax some serves to land. But it was too late for momentum to change and too demanding to beguile the best grass player that ever lived.

In the end Federer had the sense of mind to change his racquet for new balls in the final service game of the match, which he ended with a tidy ace 6-3, 6-1, 6-4 in one hour and 41 minutes.

“Aiming for eight is something you can never aim for. If you do you must have so much talent and parents and coaches that push you from the age of three on, who think you are like a project,” said Federer.

“I was not that kid. I was just a normal guy growing up in Basel, hoping to make a career on the tennis tour. I guess I dreamed, I believed and really hoped that I could actually maybe really do it. So I put a lot of work in and it paid off.”

Federer has always said this was his favourite tournament, the history, the tradition, the lack of advertising hoarding and the majesty of the Centre Court. It all appeals to the aesthete in the player.

“Funnily enough I didn’t think that much of it throughout today, throughout the trophy ceremony. I was more just so happy I was able to win Wimbledon again because it has been a long road. It has been tough at times but that is how it is supposed to be.

“So to be Wimbledon champion for an entire year now is something I can’t wait to savour and just enjoy. So it was super special. Number eight obviously means a lot to me because at that level, to be part of Wimbledon history is truly amazing.”

For Cilic, the nature and relative superficiality of his injury only inflated the annoyance. Its insignificance cut him all the deeper. During one of the changeovers, he was overcome with emotion, realising who was across the net from him and knowing then that it was no good and there was little hope.

“You go through so many things,” said the Croat. “Even exercise in the gym just to get your body ready for everything. Such a small thing can play a huge difference. Obviously extremely difficult to deal with it, to accept it in that way.

“It’s tough when you are in that situation,” he said. “You know that there is not much possibility that you are going to win.”