‘MayMac’ pantomime soap opera comes to a close in London 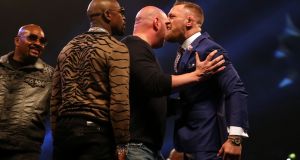 For the fourth night in a row Conor McGregor and Floyd Mayweather pretended to hate each other. Photo: Scott Heavey/PA Wire

On June 26th, 1976, combat sports fans in Tokyo watched with irritation and bafflement as Muhammad Ali had his legs kicked at furiously by a man who lay on his back in the ring. Ali’s opponent was famed catch wrestler Antonio Inoki and the fight was one of the first iterations of what might be considered a mixed martial arts bout. The rules were bizarre and uncertain. The fight ended in a farcical draw, and the overall spectacle was unremittingly awkward. It was the culmination of a soap opera storyline, and the several press conferences held to promote the fight were obvious pantomime. Still, the fight was viewed globally in record numbers.

The meeting of Conor McGregor and Floyd Mayweather, which will take place on Saturday August 26th, is the closest thing to the Ali v Inoki bout since perhaps Royce Gracie and the first UFC in 1993. The international press conference tour for the promotion of Mayweather versus McGregor closed in London on Friday night after a mixed bag of what can only accurately be referred to as performances. The tour was clearly scrambled together quickly, and the fighters – who are not professional actors or comedians – were under pressure to come up with a new ‘act’ each consecutive evening on the tour’s four stops. They frequently failed to deliver, with plenty of mainstream coverage of the press tour focusing more on the accusations of racism, sexism, homophobia or combinations of the above levelled at both fighters than the fight they were there to promote.

Overall, the tour was what UFC President Dana White predicted it would be; ‘a shit show’, though a strangely compelling one. The London leg opened with McGregor dancing jauntily and shadowboxing his way into the ring in one of his signature tailored suits (modest after his shirtless, silk trousers and fur coat ensemble at the New York press conference) to await the entrance of Mayweather. His opponent obligingly did appear, sauntering languidly toward the ring in a tiger print sweatshirt, tinted sunglasses and draped in the average person’s life earnings in diamonds. They sparkled hypnotically as the crowd chanted ‘Pay your taxes’. There was little evidence that the mass hostility bothered Mayweather (who boasts an unbeaten 49-0 record) one bit.

In short, the London press conference was vulgar, obnoxious, utterly ridiculous and, yet all things considered, an enormously enjoyable experience. The criticisms of the upcoming boxing bout in general circulation – that it is a contrived circus motivated by money – were evidently true as the tour concluded. Being in London’s SSE Wembley arena on Friday night, there was the distinct sense that these facts were not impeding anyone’s enjoyment. Over five thousand people travelled from Ireland solely to attend the press conference, to say nothing of the Irish fans within Britain who also made their way to witness the theatrics. The crowd was frenzied and, it became quickly evident, there to scream for McGregor.

The fight isn’t exactly Ali and Inoki but as a mixed martial artist McGregor does have a background in striking, though that doesn’t seem to constitute a tremendous threat from where the greatest defensive boxer of our lifetime is standing. And, according to the overwhelming majority of boxing pundits, it is still just theatre. Boxing purists have taken offence at what they see as the mercenary dilution of their sport; the absence of boxing fans at the London press conference was palpable. McGregor, a boxing blow-in, has taken his MMA fans with him into his new endeavour, and those fans have an evident desire to see their beloved sport exonerated as the superior form of combat. Both MMA and boxing fans are wrong to get defensive.

The Mayweather v McGregor fight is a hybrid thing, the like of which we will not see again in our lifetime. It is not boxing versus MMA. It is barely even Mayweather versus McGregor, between whom it is not evident there is any genuine hostility at all. It is, like Ali versus Inoki in 1976, a pantomime. A marvel. A curiosity. These should not be considered pejorative terms. The press conferences were weird and awkward, occasionally looking choreographed and almost always appearing messy, but we are witnessing something new. Errors and missteps are normal when there isn’t a path to follow.

As Floyd Mayweather stalked about the ring last night tearing down McGregor’s promotional posters like a rather clunky vaudeville villain, the crowd revelled in booing refrains. It was interactive theatre at its most visceral and fun. It is punch and judy stuff. August 26th promises a more technical bout than Ali v Inoki, given that both fighters will at least know what they are supposed to be doing in the ring.

Certainly, the swearing and the machismo of last night’s press conference won’t be for everyone any more than the violence of combat sports is for everyone. However, the pantomime soap opera the fighters staged for fans is enjoyable precisely because it isn’t real. It is billion-dollar amateur theatre, frivolous escapism for spectators. Despite vociferous predictions, no one really knows what will happen in the ring on August 26th. We are all just waiting for the story to play out, at which point Mayweather and McGregor will both be very rich men.