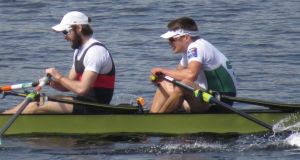 Rowing might be unique in Irish sport in having two teams that are reigning world champions. And on Friday Ireland go into the final World Cup in Rotterdam having changed one of those units because the new crew has shown itself to be faster.

The withdrawal, due to family circumstances, of Sanita Puspure, the world champion in the single sculls, has put the spotlight firmly on Paul O’Donovan’s partnership with Fintan McCarthy, who has replaced Gary O’Donovan in the lightweight double sculls.

The crew’s first outing comes in a heat, at 11.45am (Irish time) which should test them. Australia and Poland have both mounted World Cup podiums this season. Only the winner goes directly to the semi-final.

Gary O’Donovan and Jake McCarthy compete in the lightweight single sculls. The top man here is – at the least – likely to continue in this role at the World Championships next month. They can also make their case for inclusion in the premier boat at the Worlds if the present crew does not hit the mark.

The thinking here is that it will.

The Ireland openweight double of Philip Doyle and Ronan Byrne need to pull out a performance if they are to stay on course to qualify this boat for the Olympics come the World Championships next month. The women’s lightweight double (Denise Walsh and Lydia Heaphy) and the openweight pair of Monika Dukarska and Aileen Crowley must step up even more if they are to show the form of Olympians.

Tony O’Connor coached the top eight at Henley, the New Zealand men’s eight, and the Irish challenge was decent. It heightens the anticipation for the huge Irish Championships, which start today at the National Rowing Centre.

The three-day regatta is the biggest ever in Ireland: its has 1,700 individual athletes and 1,224 crews, and it features the trials for the Home Internationals.

Shane O’Driscoll and Mark O’Donovan have been entered as part of a Cork/Skibbereen eight which hopes to be a fox in the henhouse.

Commercial, whose Henley run ended with a half-length defeat in the semi-final of the Thames Cup, are deserved favourites to defend their title. They have narrowly held off UCD all season, though UCD’s Henley four should reverse the order and retain this title.

The women’s eight is less predictable. NUIG/Castleconnell, Cork and Trinity – and, as a long shot, UCD – will all have hopes. But the Skibbereen/UCC women look the best unit, if they gel.

The women’s junior 18 eights have produced good racing this season, and Bann and Enniskillen should be at the sharp end. Enniskillen will hope to come out on top in the junior men’s eight.

Young star Claire Feerick, in a successful gofundme appeal, notes that it costs €2,700 in levies alone to go to the World Under-23 Championships. Rowing Ireland has launched Greenblades, an initiative to help fund the junior, under-23 and development teams by means of donations.

Michelle Carpenter, the chief executive of Rowing Ireland, said the comments were on the Henley website during the regatta. She said she knew who had posted and legal advisers were dealing with the authorities, including the Garda and the PSNI.

Asked if it might reflect badly on rowing if a known figure in the sport was prosecuted, she said: “But is it not bad what they were putting up on a public website? They were very nasty remarks. Very hurtful, nasty remarks.”