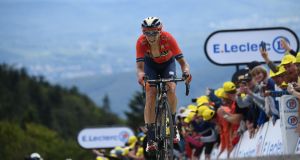 Belgium’s Dylan Teuns pedals before crossing the finish line of the sixth stage of the 106th edition of the Tour de France. Photograph: Getty Images

Belgian rider Dylan Teuns scooped the biggest result of his career on Thursday, winning the sixth stage of the Tour de France after going clear in a large breakaway group earlier in the day. The Bahrain Merida rider and Giulio Ciccone (Trek-Segafredo) proved strongest of the move on the day’s final climbs, and neared the summit of the feared La Planche des Belles Filles climbs together.

Ciccone tried to stay with Teuns on the dirt road section inside the final kilometre but had no answer when his rival powered clear inside the final 100 metres. They and third-placed finisher Xandro Meurisse (Wanty-Gobert) had enough of a buffer to stay clear of the group of overall favourites, which was led home by defending Tour champion Geraint Thomas. The Team Ineos rider forged clear close to the line, finishing one minute 44 seconds behind Teuns and gaining a handful of seconds on all of his rivals.

Frenchman Thibaut Pinot (Groupama-FDJ) and race leader Julian Alaphilippe (Deceuninck-QuickStep) were the closest to him, conceding just two seconds, but Alaphilippe’s bid to hold the yellow jersey was foiled by the time gained by Ciccone on the stage. The latter had picked up an eight second time bonus on the day’s penultimate climb and ended the day six seconds clear of the Frenchman.

Ireland’s Dan Martin finished 14th at the summit of the climb, 14 seconds behind Thomas. He had been second on the stage the last time the Tour de France finished at La Planche des Belles Filles in 2017, but this time was eleventh-best of the overall contenders.

However he was surprisingly upbeat after the stage. “I think it [the day] was a lot easier than we expected. The breakaway went almost immediately,” Martin said. “It was an interesting stage, I think everybody was a bit cautious because the last section with dirt was really hard and people were waiting to go full gas there. I lost a bit of time on the dirt section but I’m not worried.”

His lack of concern is due to the change he made in his training this year to be better on the longer climbs, surrendering some of the explosiveness he previously had on shorter ascents. “The climb was just really explosive and I haven’t worked on that bit,” he told The Irish Times on Thursday. “I am there or thereabouts.

“I feel really good. I think this Tour will be about who has the least bad days, and today was definitely not a bad day for me.”

Martin has climbed from 35th to 18th overall. He is one minute and 46 seconds behind the new race leader Giulio Ciccone (Trek-Segafredo). Nicolas Roche finished 79th on the stage and slipped to 51st overall, 17 minutes and six seconds back. His team wants him to target stage wins, and said that he was saving his legs to go on the attack in later stages.

In other news, junior rider Lara Gillespie took a superb silver medal in the individual pursuit at the European under 23 and junior track championships in Gent in Belgium. She set a new national record of 2 minutes 21.579 seconds en route to second place behind the Briton Elynor Backstedt. In doing so, she added to her silver medal on Tuesday in the scratch race.

At home, British rider Isaac Peatfield lost out on an almost certain sprint victory with a premature celebration at the end of stage three of the Junior Tour of Ireland in Barefield. He was pipped by a lunging Nick Carter (Hot Tubes 1), with Finley Newmark best of the Irish riders in fifth place.

Carter’s teammate Magnus Sheffield (Hot Tubes 1) retains the overall lead, with Peatfield jumping up three places to second overall. He is four seconds back. Mark Smith (Verge) is first of the Irish overall in seventh place, 14 seconds behind.