America at Large: the man who paid Muhammad Ali $2.5m to get whupped 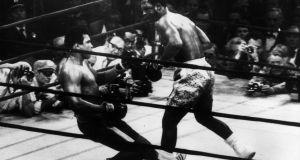 Joe Frazier drops Muhammad Ali during the 15th round of ‘The Fight of the Century’ at Madison Square Gardens. Photograph: Keystone/Getty

Jerry Perenchio was in a suite at the Dorchester Hotel in London when he got a phone call from an old pal in Chicago telling him the rights for the world heavyweight title bout between Joe Frazier and Muhammad Ali were still available. He took out his pencil, did a few simple sums, and called back with an offer of a guaranteed $5m purse to be shared equally between both fighters. He had never promoted a boxing match before, had never even seen Frazier in the ring, but figured something that would be justifiably billed “The Fight of the Century” warranted that sort of money.

“There’s never been anything like it in my lifetime,” said Perenchio, “very possibly since time began!”

A few weeks later, at a press conference at Toots Shor’s on 52nd Street, Perenchio boasted that the gross from the Madison Square Garden bout was likely to be somewhere between $20m and $30m as the world was stumping up to watch the clash of two undefeated heavyweight champions on closed circuit television. No sooner were those gaudy numbers out of his mouth than Ali jumped to his feet, looked over at Frazier and roared, “They got us cheap Joe! Only 5 million out of 20 to 30 million. We’ve been taken!”

Ali may have been right. Shortly after his death in 2017, Perenchio’s Bel Air mansion, Chartwell, went on the market for $350m. Although the asking price has since been slashed to a far more reasonable $245m, it remains the most expensive real estate listing in America just now. The going rate, apparently, for a palatial limestone-clad mansion that Irish people of a certain age might recognize as the property purchased by the Clampetts when they struck oil on The Beverly Hillbillies television show back in the day.

Chartwell was not the house that Ali-Frazier built. Perenchio amassed a fortune north of $3bn during half a century as a Hollywood agent, producer, studio mogul and owner of the largest Spanish language television network in America. The money man behind movies like “Driving Miss Daisy” and “Blade Runner”, at various times, he represented Andy Williams, Marlon Brando, Ronald Reagan, Glenn Campbell, Richard Burton, and Elizabeth Taylor. A professional life spent in a galaxy of stars taught him enough about the box office that in 1971 he realized that, far beyond a boxer, Ali was a matinee idol transcending the world of sport.

“If they can sell Judy Garland’s red Oz shoes for $15,000, then we should get at least as much for these,” he said, about plans to auction off the fighters’ gloves, boots and shorts after the bout. “We get a little blood on the trunks. It makes them all the more valuable.”

Perenchio brought a different commercial sensibility to the fight game, treating the selling of Ali-Frazier like he the opening of a blockbuster movie, even comparing it in interviews to “Gone with the Wind”. Burt Lancaster, one of his oldest friends, was drafted in to do co-commentary and the actor ended up contributing a lot more than he bargained for.

“I knew Burt could help promote the fight,” said Perenchio. “He even sparred a round with Ali. Ali slapped him around. Burt’s body was kind of red after that.”

Somewhere along the way, Perenchio effectively created the modern superfight, laid the foundation for the emergence of pay-per-view spectacles and showed that Hollywood hyperbole played equally well in the sports world. He told reporters the denizens of the boxing universe reminded him of “the court of the Borgias” and claimed the logistics of the event were akin to “staging the Normandy landing”.

“This fight is entertainment,” he said. “You could show it on the side of a supermarket and people would come see it.”

On March 8th, Madison Square Garden broke the box office record for an indoor event and Salvador Dali, Miles Davis, Elvis Presley, and Bernadette Devlin (sorted for a ticket by legendary New York columnist Jimmy Breslin) were among the luminaries ringside. Famously, Frank Sinatra volunteered to photograph the contest for LIFE magazine - whose correspondent on the night was Norman Mailer. As the world stopped to watch, a group of radicals used the distraction to break into the FBI offices in Pennsylvania to steal a raft of files, including the one the government kept on Ali himself.

Accounts differ about exactly how much money Perenchio made from the evening. During the build-up, he had a serious cash flow problem that required him partnering with Jack Kent Cooke, then owner of the Los Angeles Lakers. Some estimates reckon the pair shared a profit of $5m. A huge sum then. Small beer now when you consider that, upon his death, Perenchio bequeathed a $500m art collection, including works by Claude Monet, Réné Magritte, Paul Cezanne, Pablo Picasso and Édouard Manet, to the Los Angeles County Art Museum.

After the judges had confirmed Joe Frazier’s victory following 15 sapping rounds, Perenchio made his way to the loser’s dressing-room to pay his respects. An exhausted Ali was sitting there with Diana Ross, the singer crumpling up her shimmering evening gown as she knelt by his feet sobbing at the bruising nature of his defeat. Ali took her head in his hands, and gently turned it around to greet the visitor, saying, “Diana, take a look at the man who paid me $2.5m to get whupped.”

1 Gerry Thornley: Consistent trailblazers New Zealand once again ahead of the posse
2 Ken Early: PSG would be sensible final move for Ronaldo
3 My sporting disappointment: Jimmy White and the elusive World Championship
4 Rory McIlroy: Maybe I’m just not as good as I used to be
5 Andy Sullivan fights back tears as he wins English Championship
Real news has value SUBSCRIBE