Lessons from ill-fated and utterly bonkers USFL were largely ignored 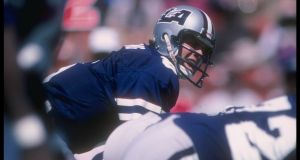 Quarterback Steve Young of the Los Angeles Express in action during an USFL game at the Coliseum in Los Angeles in 1984, California. Photograph: Alvin Chung/Allsport

Nelson Manges was reputed to be one of the richest oil men in Texas in the 1980s. A wannabe JR Ewing, an eccentric plutocrat used to always getting his own way.

As owner of the San Antonio Gunslingers of the United States Football League (USFL), Manges decided to improve the team’s parlous punting by forcing them to sign James Edgar Roberts.

At 39, Roberts was paunchy, two decades removed from his high school athletic pomp, but he happened to make his living as a ranch hand on Manges’s sprawling 100,000-acre property. And the boss thought he had a strong leg.

When he walked into training for the first time, Roberts seemed embarrassed Manges had followed through on this curious whim. His sense of shame deepened when he started to fluff kick after kick as the professional punters watched on, equal parts bemused and appalled.

The sorry experiment might have ended there except the owner then ordered the coaches to ignore his pathetic audition, add him to the roster and play him in their next match. He went straight from the farm to the field, standing on the sidelines against the Portland Breakers as the staff spent half the game trying to figure out how to hide his presence from the media.

As illustrations of how utterly bonkers the league was, the curious case of James Edgar Roberts is only one of so many contained in Jeff Pearlman’s utterly forensic, absolutely hilarious, and frequently bawdy Football for a Buck: The Crazy Rise and Even Crazier Demise of the USFL.

For three spring seasons in the 1980s, the USFL was an upstart rival to the long-established autumn behemoth, the NFL. For those three campaigns, Pearlman offers proof that this maverick might just have been the most rambunctious demi-monde in the history of pro sports. Certainly, no other could claim to be quite as madcap and profane.

“Think of your favourite Looney Tunes episode,” writes Pearlman of the San Antonio Gunslingers, “inject it with a line of cocaine, then stir in some really hideous uniforms, a senile seven-fingered coach, a wackadoo owner, a decrepit stadium, bouncing checks, speeding cars, murderous defensive linemen and a football.”

As if to bolster an exhaustively-researched brief, he cites one player missing a game due to a “groin injury” caused by slamming his own penis in a trunk. Only in the USFL would it have to be clarified that the incident occurred with a trunk in the locker room not the boot of his car. When another team hired a private detective following a released player threatening to return and shoot the coaches, the security guy happened to be moonlighting from his day job as Liberace’s bodyguard.

Players routinely smoked on the bench during games, openly snorted lines of cocaine in the locker rooms, and at least one of the coaches enthusiastically toked joints in front of his team. Steroids were everywhere. Just about anything went.

Squads were populated by a lot of has-beens, a few never-weres, a sprinkling of long-shot dreamers and some serious once-in-a-generation talents like Steve Young, Herschel Walker and Jim Kelly.

Although the public perception has always been of an inferior product, 158 USFL alumni went on to play in the NFL, 60 made it to the Pro Bowl, two won Super Bowl MVPs, and four are in the gridiron Hall of Fame.

Throw in a slew of coaches who also made the switch and those gaudy numbers prove that, for all the dysfunction on and off the field, the standard of play was high enough to compete with its longer-established rival. Especially given the trying circumstances.

As quarterback for the financially-challenged Los Angeles Express, Young once paid out of his own pocket to have somebody mow the grass on the training field.

Outraged, Young’s mother, Sherry, got to her feet in the stands and shouted at the chorus of naysayers, “That’s my son! He’s a good boy and, by the way, it’s an annuity!”

It was, indeed, a back-ended contract the bulk of which he was to be paid over the course of his lifetime. Like so many others owed money by the USFL, he was left whistling for that when the league went out of business in 1986.

There were a whole host of reasons why, including the rather salient point that many of the club owners were never as rich as they pretended to be. Those exaggerating their net worth and, crucially, lying about their willingness and ability to flash the cash included the owner of the New Jersey Generals, Donald J Trump.

Even if Pearlman resists the urge to allow the tangerine spectre to overshadow such an entertaining narrative, he rigorously documents how Trump routinely lied to the other owners about how much he could make them, pretended to be somebody he wasn’t (impersonating a publicist), embarked on ill-advised legal action, and even tried to get rival clubs to pay for his most expensive signing.

In other words, he did everything to the USFL that he’s now doing to the USA. Those who do not learn from history . . . Yeah.