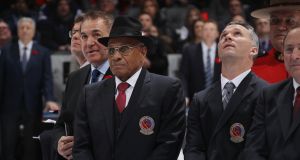 The scene was Dodger Stadium in Brooklyn in 1949. Two summers after breaking baseball’s colour barrier, Jackie Robinson came out after a game for a meet and greet with a visiting youth team from Canada. At one point on his way down the receiving line, he shook hands with a 14-year-old named Willie O’Ree who summoned up the courage to speak to his hero.

“I’m a baseball player,” said O’Ree. “But what I really love is hockey!”

Not quite nine years later the kid pulled a Boston Bruins’ shirt over his head for a game against the Montreal Canadiens at the old Forum and, that January day in 1958, became the first black man to play in the National Hockey League. His parents drove 500 miles cross-country to see their child make his debut, and, in all the excitement at just getting called up to the show, O’Ree didn’t even realise he was making sporting history. The true significance of his presence on the ice was only brought home to him when he read the newspaper accounts of it the next morning.

Not everybody saw it quite like that. Some opposing fans greeted him by throwing black cats onto the ice, others fired cotton balls and urged him go back to the plantation. At Madison Square Garden, the baying mob crowded around the locker room and were jabbing their fingers at him through the windows. In Chicago, the Blackhawks’ Eric “Elbows” Esterenko called him “n***er” before breaking his nose and knocking out two of his front teeth with the butt end of his stick. When O’Ree struck back that night, all hell broke loose.

That his career in the majors was brief and truncated, just 45 games over two seasons, scarcely mattered. The mere fact of his being there was enough to break new ground and, eventually, to pave the way for those who came after. For this pioneering contribution to the sport (hockey was the last of America’s big four to integrate) and his work to improve diversity on the ice in more recent decades, O’Ree was, rather belatedly most would say, inducted into the NHL Hall of Fame last Monday night. There have been many better players afforded that accolade but none with a backstory to match his.

One of his ancestors escaped slavery on a South Carolina plantation, made his way up the east coast and joined the British army during the Revolutionary War. Eventually, the family used the underground railroad network to cross the border into Nova Scotia and to settle in Canada. O’Ree was one of 13 children raised in Fredericton, New Brunswick, a mining town with just one other black family. His first pair of skates were wooden blocks with blades attached to the bottoms and straps to wrap the unwieldy contraptions around his shoes. Good enough for a kid learning his trade on the neighbourhood rinks.

“I did a book report on Willie in school, and I learned that he was not only the first black player in the NHL, but he achieved that feat when there were only six teams you could play for,” wrote the Philadelphia Flyers’ Wayne Simmonds, one of 30 players of African descent in the league today and somebody who has had fans fling banana peels at him during matches. “Willie set the table for everyone else to eat, and he did it all with dignity and class. I used to think about Willie’s story whenever teachers or hockey parents or coaches would laugh at my dream of making it to the NHL.”

Sixteen years elapsed between the pioneer making his breakthrough and Mike Marson becoming the second black player. Too long a gap. In the interim, O’Ree had returned to a productive career in the minor leagues around California before eventually segueing into the real world where he worked security, sold cars and managed fast food restaurants. That he had endured so long in the sport, still playing into his 40s, was all the more remarkable given that all along he’d been hiding the fact that a puck left him blind in his right eye from early in his junior career.

His stubborn refusal to be cowed by a mere physical handicap made him perfectly suited for the role of NHL diversity ambassador, a job he has done for the last two decades. Conscious of the lack of minority representation in its ranks and lingering racism in the crowd, the league charged O’Ree with the task of bringing the message of inclusivity, especially to areas not traditionally associated with hockey. Even now, at 83, he traverses the continent each week preaching his gospel about how the simple joy of a stick and a puck can change the trajectory of lives.

“True strength comes from diversity and inclusion,” he said. “It makes the game better. Tonight I’m here to tell you that we’re not done, because the work is not done. We have barriers to break and knock down and opportunities to give. I leave this with you: When you return to your communities, take a look around. Find a young boy or girl who needs the opportunity to play hockey and give it to them. You never know. They may make history.”

And he would know.