Eliud Kipchoge: the best athlete on the planet bar none 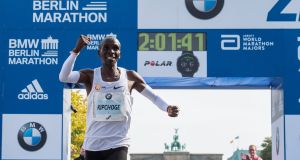 Enough already. Nowhere does the objective meet the subjective with greater fear or envy than at the annual sporting awards, and everyone keeps saying we’ve never had a year quite like this one.

Pity the poor athlete or team who wins anything in December. Sorry, all sold out, try again next year. Truth is medals are still part of the objective of the Irish team at next weekend’s European Cross Country in the Netherlands, so watch this space.

It the meantime it’s been hard enough trying to distinguish what counts or matters most within one chosen sport. Points or goals? Medals or times? Height or distance? The sort of conversations and debate Ayn Rand could have written another very long book about.

Some have it easier than others, especially when little else is required other than a fast pair of legs and a good set of lungs. And medals typically count and matter in the public eye, something shiny and tangible and better still when presented with a green and gold ribbon – which is why no one was surprised when Thomas Barr was named Athlete of the Year at the Athletics Ireland awards on Thursday, his bronze medal won over the 400m hurdles at the European Championships in Berlin last August the standout performance on the track or field.

The real fun starts when they’re all bundled together and everyone gets to have their say – as with the 23 contenders for the 2018 RTÉ Sportsperson of the Year award, to be named on December 15th. Barr is the mix there too, along with Dublin women’s captain Sinéad Aherne, boxer Kellie Harrington, rower Sanita Puspure, which adds some of the gender sporting debate to the conversation. Good luck.

Not everyone can kick a ball like Johnny Sexton, throw a punch like Katie Taylor, ride a bike like Dan Martin or hurl like Cian Lynch. But everyone can run or jump or throw, or at least think they can, which is why athletics award winners are usually more objective than subjective.

The latest example of that comes at the Le Meridien Hotel in Monaco next Tuesday, at the 2018 IAAF awards, and particularly with the Male Athlete of the Year award.

There are five nominees: American sprinter Christian Coleman, who ran a world indoor 60m record of 6.34 seconds, and won the 100m Diamond League; Armand Duplantis from Sweden, the gifted 19-year-old who won the pole vault at the European Championships, breaking eight Under-20 world records; Kevin Mayer from France, World indoor champion in the heptathlon and who set a world record in the decathlon; Abderrahman Samba from Qatar, unbeaten in nine finals in the 400m hurdles, running the quickest time since 1992.

And then there’s Eliud Kipchoge from Kenya, who last April in London won his eighth consecutive major marathon (including the Rio Olympics), then came out in September in Berlin and ran a world marathon record of 2:01:39. He took one minute and 18 seconds off the previous record, set in 2014, when fellow Kenyan Dennis Kimetto became the first man to go under 2:03, clocking 2:02:57, also in Berlin.

Kipchoge’s time was thus the first sub-2:02, the biggest improvement on a men’s marathon world record in 51 years, when Derek Clayton, born in Cumbria, raised in Northern Ireland, and running for Australia, took it down by two minutes and 37 seconds in 1967 when clocking 2:09:36.

His average speed over the 26.2 miles was 13 miles-per-hour, and the people at Runner’s World magazine had an interesting stall at the Chicago Marathon Expo, setting up a large treadmill and running it at Kipchoge’s world record pace of 13 miles-per-hour. The results were hilarious, most of those who tried to last the pace managing about a minute or two before flat on their faces or their backs, and most were half-decent marathon runners to begin with. Trust me, it’s fast, very fast.

Kipchoge’s 2:01:39 in Berlin also reopened the conversation around the sub-two-hour marathon, the last great “barrier” of athletics -–if not sport itself. Along with the sub-four-minute mile, and later the 10 second barrier for 100m, it represents a sort of Everest of human endeavour, the only one that has yet to be conquered.

Much has been written about Kipchoge’s attempt at that barrier, at the staged Nike Breaking-2 project in Monza last year. Using every possible legal advantage and ignoring most of the IAAF’s criteria on where and how marathon world records can be broken, Kipchoge ran 2:00:25, and for all the debate around that run – including some modern myth about the runners he was wearing – the time looked perfectly legit.

Kipchoge has us believing in the impossible again – only in the believable sense too. My first sight of his potential was at the 2003 World Championships in Paris, when he arrived from the proverbial nowhere, aged only 19, and upstaged Hicham El Guerrouj from Morocco and Kenenisa Bekele from Ethiopia to win the 5,000m. “The kid can run,” we told ourselves in the press seats, not realising we would still be saying it 15 years later.

Not every athlete coming out of Kenya can be trusted these days, but Kipchoge’s graph and trajectory is about as constant as they come by modern sporting standards.

This might be the most open and shut award of the year, the easiest of the lot, because in running 2:01:39 Kipchoge is in a class and on a level of his own, the best athlete of 2018 bar none, doing what no one else on the planet can do right now – and that’s being perfectly objective and subjective about it.

1 Getting behind the rotten core of rugby with Dan Tuohy
2 Football fan survey: Almost half of Irish adults say they support a club
3 Irish squad in the dark as clouds hang over Six Nations
4 Leeds goalkeeper Casilla given eight-game ban for racism
5 Larry McCarthy to become first overseas president of the GAA
Real news has value SUBSCRIBE