Shandon come out on top of Muckross head 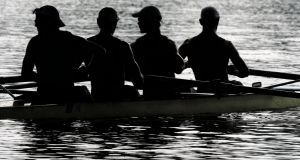 Shandon impressed at the giant Muckross head at the National Rowing Centre in Cork, where more than 430 crews competed.

Three Shandon crews placed in the top six on the provisional results, and their intermediate eight was fastest of all with a time of nine minutes and nine seconds for the 3,000-metre rolling head. Cork Boat Club was next on the list, just nine seconds back.

The fastest women’s crew were UCC’s club eight who came in at 10 minutes 54 seconds.

The Head of the Shannon in Carrick on Shannon was run in cool, calm weather, though conditions were better for the second head. The best time in the published results came from this head – and it was a junior crew.

Coláiste Iognáid’s junior 18 men’s eight were credited with covering the course in 12 minutes 56 seconds. Commercial’s men’s eight had a time of 13 minutes 31 seconds.

Coláiste Iognáid women’s junior 18 eight matched their male clubmates by being the fastest women’s crew – and they did it in the first head.

Commercial’s men’s masters eight had been fastest overall in that head.