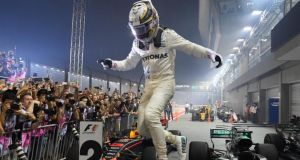 Lewis Hamilton’s hopes of winning this year’s Formula One championship received a huge boost in Singapore after the Mercedes driver benefited from rival Sebastian Vettel’s first-lap crash with Max Verstappen and Kimi Raikkonen to storm to victory.

Hamilton, who started only fifth and had claimed that he needed a miracle to win, led every lap of a chaotic race which saw the safety car deployed on three occasions.

The race under the floodlights of the Marina Bay circuit had been billed as a must-win for Vettel given that the twisty, slow-speed track suited his Ferrari car.

But after getting the job done here in qualifying on Saturday night, he was then involved in what is likely to be the defining smash of the year.

On a damp track following a deluge of rain just 15 minutes before the start, Vettel moved to his left to cover off Verstappen, and a fast-starting Raikkonen.

Raikkonen, tight against the pit wall, surged ahead of Verstappen, but at 120mph his right rear tyre made contact with Verstappen’s front left, and he was sent out of control before thudding into the side of his Ferrari team-mate.

As Raikkonen and Verstappen came to a sudden halt at turn one – colliding with an unfortunate Fernando Alonso in the process – Vettel managed to keep his Ferrari on the straight and narrow. But on the exit of turn three, and with significant damage to his car, the German lost control and crashed into the concrete wall.

Hamilton surged past Vettel and took the lead of the race. The safety car was issued to deal with the stricken Ferrari and Red Bull cars, and it returned again, when Daniil Kvyat crashed out on lap 11, and then again on lap 38 after Marcus Ericsson spun on the Anderson Bridge.

But Hamilton kept his cool to not only remain in charge of the championship – a scenario which appeared almost impossible here on Saturday night – but extended his lead to more than a single victory.

Vettel attempted to put a brave face on the fist-lap mayhem – an incident which will now be investigated by the stewards – but he will know that his chances of stopping Hamilton march on to the title have taken a significant hit.

“I had an average start, moved slightly to the left and was trying to fend off Max,” Vettel explained. “Then the next thing there was a bump on the side and I saw Kimi’s car, so I don’t know what happened.

“There’s nothing we can do now. It doesn’t change much. We’re not in the race now and can’t show the pace that we had. I’m sure there will be more opportunities.”

In contrast, Verstappen moved to lay the blame at Vettel’s door. “If you are fighting for the world championship you shouldn’t take those risks squeezing someone that much,” he said. “You can see what happens. Lewis is leading the race and the three of us are out.”

For Hamilton, he will not care who was at fault as fireworks greeted his third successive victory. “Guys, what can I say?” he said over the team radio. “What a turnaround. Thanks for believing in me.”

Carlos Sainz crossed the line in fourth for Toro Rosso ahead of Force India’s Sergio Perez, while British driver Jolyon Palmer finished a career-high sixth to claim his first points finish of the season.