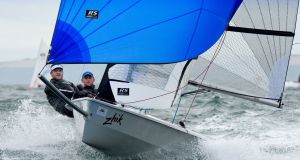 With just over one week to go, Irish Sailing has announced the line-up for both its Senior and Junior All Ireland Sailing Championships which draw sailors from many disciplines for an-end-of season champion of champions climax.

The senior event – celebrating its 70th anniversary – is scheduled to sail in GP14 dinghies and the junior event in Schull’s own TR3.6 dinghy design.

There’s an obvious advantage to Greystones Sailing Club invitee Shane MacCarthy, who is the current GP14 World Champion, but he can expect some tough competition from dinghy rivals all the same.

Defending All Ireland champion Alex Barry, who came second and third in the previous two events is confirmed along with West Cork’s Fionn Lyden, this month’s bronze medalist at the U-23 Finn World Championships.

Noel Butler and Simon Revill are the 2017 Irish Fireball National Champions. They won seven of the nine races at Lough Derg last weekend.

For Sutton-based Revill, this gives him a unique 2017 double – he is also one half of the IDRA 14 National Champion crew from the Galway Bay championships last month.

Dun Laoghaire’s Ger Owens was the winner of the GP14 Autumn Open at the weekend when he topped the 19-boat fleet event in Cork Harbour. Second was East Antrim Boat Club’s Curly Morris with Sutton Dinghy Club’s Conor Twohig third. Youghal Sailing Club’s Jack Buttimer was the winner of the 13-boat youth championships.

A week after the launch of its revamped Volvo Cork Week Regatta, Royal Cork Yacht Club have issued a change of date for next year’s regatta. The date change to July 16th-21st is, according to event chairman Kieran O’Connell, to avoid clashing with both the Round Ireland Race (June 30th) and the Round The Island Race (July 7th).

Howth Yacht Club’s J24 under-25 team lie just outside the top third of the 63-boats J24 World Championships in Ontario, Canada this week. The only Irish crew in the event are skippered by Lizzy McDowell with Ciaran White, Darragh White, Harry Conin and Graham Blay onboard.

The Dun Laoghaire Motor Yacht Club is expecting a strong turnout for its Kish Lighthouse Race on Sunday. Open to all comers according to the organisers, the warning signal will be at 10.55am from the Dublin Bay Starting Hut on the West Pier and the intended course is Kish to port and back.

“The emphasis is on participation for all suitable yachts, and the DMYC hopes to attract entries for racer, recreation and cruiser sailors alike,” said rear-commodore Neil Colin.

Two Northern Ireland sailors, Mikey Ferguson and Andrew Baker, who have Vendée 2020 ambitions, are waiting for a weather window to attempt a new Length of Britain speed record. The current record, from Land’s End to John O’Groats, held by British sailor Phil Sharp, stands at three days, 11 hours, 52 minutes, 15 seconds at an average speed of 7.39 knots.