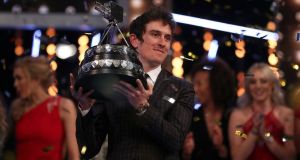 The Tour de France champion Geraint Thomas rode a wave of public support to become the BBC’s sports personality of the year and continue cycling’s recent dominance of the prize.

Thomas was the fourth cyclist since 2008 to win the award after Chris Hoy, Mark Cavendish and Bradley Wiggins before him. The 32-year-old received endorsement on the night from Hoy, amongst others on social media, helping to rally the vote as Thomas forced five-time world Formula One champion Lewis Hamilton into second place. Third place in the poll, which was decided by votes cast on the night by viewers, was England striker Harry Kane, top scorer in the World Cup.

On a night that drew out a theme of female sporting achievement, capped by the presentation of a lifetime achievement award to Billie Jean King for breaking ground on and off the tennis court, there were also awards for Tracey Neville’s netball side.

“It’s just insane‚” Thomas said of receiving his accolade. “I’ve grown up watching sports personality in my front room on the sofa and, when I walked up on the stage, I was shaking a little bit. I take great pride in representing Britain and Wales whenever I’m racing and it’s been a great year for British sport. Long may it continue.”

Inside Birmingham’s Resorts World Arena, a 10,000-strong audience of sporting VIPs and members of the paying public were treated to a two-hour show doing its best to be a spectacle. The BBC had announced several changes to the format this year, partly to pep up the event for TV. The biggest change was a cut in the number of nominees for the main prize, with just six contenders who only learned of their inclusion during the live broadcast.

There were high-octane montages, chatty interviews and, also, musical interludes. The comedians David Baddiel and Frank Skinner performed a paunchy, middle-aged version of Three Lions in a reunion with the Lightning Seeds and went on to present Gareth Southgate with his award for coach of the year, thanking him “for all the royalties”.

Southgate was typically modest in accepting his trophy. “If you win as a coach it means your players have done something right,” he said. “Ultimately, we didn’t quite win the World Cup, I’m conscious of that, and till we all win together we won’t be satisfied. But sport is about inspiring people and bringing enjoyment and we enjoyed this journey with all of you.”

It was a big night for coach Tracey Neville and the 12 women who formed the England squad that won netball gold at the Gold Coast Commonwealth Games. A last-minute victory for England over Australia which prompted crazy scenes on the court had obviously endeared the team to an audience back home. Helen Housby’s buzzer-beating penalty won the moment of the year award, which was voted for by the public, while judges also named Neville’s side team of the year.

“It’s been a very long journey,” said the captain, Ama Agbeze. “It’s taken us years and years and this is the first time netball has managed to get a gold medal. We hope that in years come the netball World Cup will be on show like the football one tonight.”

The winner of the category formerly known as overseas personality of the year was also decided by the public. Now rebranded as world sport star and open to voters from around the world, it was won by the golfer Francesco Molinari. In the summer, he became the first Italian to take a major, before later winning all five points from his Ryder Cup fixtures in a victorious European campaign.

King received her achievement award not only for the 39 grand slam titles she won over a 15-year professional career but for her role in advancing gender equality. She was given her award by Sue Barker, the BBC presenter and her opponent in the third round of Wimbledon in 1978. “It means so much to have Sue present this to me,” King said, before delivering the following message to her fellow athletes: “If you see it, you can be it, and we all stand on the shoulders of those who came before us. To all the athletes who truly have a platform let’s continue to use the power of our voices and our actions to inspire others.”

Another moving moment came with the presentation of the Helen Rollason award for “outstanding achievement in the face of adversity” to the racing driver Billy Monger, now 19. The teenager had both legs amputated after a crash during a Formula 4 race at Donington Park last year. This year he returned to competition, in Formula 3, and claimed pole position in his first race back at Donington.

Walking to the stage on prosthetic limbs, Monger was given a standing ovation. He gave a generous speech, surrounded by the medical staff who had saved his life.

Monger’s address was accidentally curtailed by Clare Balding, but he was brought back on stage later to finish his address. “Just in case you haven’t had enough of me already, I just wanted to thank my mum and dad,” he said.