Entries for 2019, on the 40th anniversary, are already sold out – prepare for sweet insanity 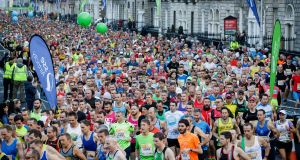 The 2017 Dublin Marathon. The number of entries have hit 20,000. Photograph: Ryan Byrne

Do you suffer from sudden and inexplicable mood swings?
Do you frequently experience agony and ecstasy?
Do you have sudden thoughts of invincibility?
Do you often exhibit strong or unstoppable willpower?
Are you sometimes disinterested in work or family life?
Do you have a hard time getting out of bed in the morning?
Do old acquaintances sometimes treat you as if they no longer know you?
Are you prone to significant changes in appetite?
Do you sometimes crave loneliness?
Do you occasionally immerse yourself in ice-cold water?

Pardon me if you’ve read this before, but the madness is back – only this time it makes more sense. According to the Diagnostic and Statistical Manual of Mental Disorders – published by the American Psychiatric Association, and a sort of handbook of all things considered slightly crazy, there are 365 disorders of the human mind. Three hundred and sixty-five. One for each day of the year, evidently.

The mind of a certain marathon runner used to be in there somewhere. The people who considered 26.2 miles of running as one less thing to do in life, as long as it came with a finisher’s T-shirt and a certificate of honorary discharge. And the time didn’t matter as long as it was faster than Oprah Winfrey. “The miracle isn’t that I finished, the miracle is that I had the courage to start.”

Everyone has their own definition of madness, especially in boom times, and more so in any so-called sporting context. Opening a greyhound track for a breakfast race meeting when the only punters are those watching online on the other side of the world. A strong man buying anabolic steroids out of a health food shop so he can bulk up and shrink down under at the same time.

To some people. entering the 2019 Dublin Marathon 10½ months in advance, when there is no guarantee of even making the start line, might sound like madness. Like buying a ticket for a music festival next October before the line-up is even confirmed. All humans have an Achilles’ heel – only marathon runners know a lot more about it. Nothing pulls on the calves or the hamstrings more than a 20-mile run. Who knew a slight groin strain could be so utterly debilitating?

Actually, all this makes perfect sense. Monday’s announcement that all 20,000 entries for the 2019 KBC Dublin Marathon have already sold out, long before the starting gun is even loaded, will come as no surprise to those who actually entered, or indeed ran it in recent years – although it may be a shock to all of those who didn’t get their entry in fast enough.

It undoubtedly helped that the 2019 event, set for Sunday October 27th, marks the 40th anniversary of the Dublin Marathon. Nothing beats a little nostalgia to help sell any event, only, unlike parts of the last running boom in the mid-2000s, when everything was selling out well in advance, and especially apartments, this is no sham, no Great Save Me 10k, no Starbucks Foamy Sofa Seat Marathon.

Aughney has seen marathon running rise and fall over those last 21 years, Dublin at one stage not far off the point of extinction

These are the people who know the €83 entry for Dublin (or €93 after the first 16,000) is probably the best value in town for the mind and body and spirit and everything else in between. And far less expensive compared to what some of them used to spend each month on gym membership which they wouldn’t even use most of the time anyway. Something different in a life more ordinary.

The limit of 20,000 race entries was set two years ago, considered the maximum the course can allow under its current guise. Entries for the 2019 event only opened on November 1st. By this time last year, ahead of the 2018 event, just 3,000 had signed up; by Monday of this week, all 20,000 places were gone. Although there is clearly room for yet further growth, it’s not just about getting the balance right between supply and demand – it’s also about balancing the quality and quantity of the race itself.

No one knows this better than Jim Aughney, who for the last 21 years has been Dublin Marathon race director along with the equally loyal and indefatigable team at the Business Houses Athletic Association (BHAA), one of the founding organisers of the race. Aughney has seen marathon running rise and fall over those last 21 years, Dublin at one stage not far off the point of extinction. Just five years ago, in 2013, it also found itself without a headline sponsor, the elite overseas entry cancelled.

When it started in 1980 with 2,100 runners, the late Noel Carroll of Dublin Corporation knocking heads with RTÉ Radio 1 producer Louis Hogan to mimic the marathon event witnessed in New York, the motivation was twofold: give the city a new sporting event outside the realms of Croke Park and Lansdowne Road; and, for Hogan, given the task of helping set up Radio 2, RTÉ’s new pop alternative determined to compete with the numerous pirate stations in Dublin at the time, what better promotional vehicle to get the station’s new message to the public than a Dublin marathon?

If it sounded like madness then, entries had increased to 11,076 by 1982. In 1987 numbers fell to below 4,000 for the first time since the inaugural year. The rise and fall continued: Dublin’s Millennium celebrations brought numbers to almost 9,000, but in 1989, that number dropped back to just over 3,000. Only by 1999, for the 20th edition of the race, did numbers recover, and the upward trend would continue. For a while American charity groups helped beef up the numbers, before 9/11 put a sudden halt to that.

In 2016 the event was moved from its traditional October Bank Holiday Monday to the Sunday, which Aughney says directly contributed to the first sell-out of runners, a 30 per cent increase on 2015, only to hit the 20,000 – participants remember, not punters – even before 2019. Has such madness ever made such sense?