The team which will lose Sky as a sponsor next year made cycling more professional, yet forfeiting some of its humanity 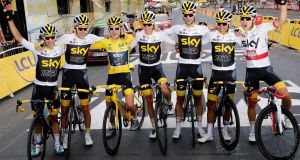 Every now and then a new force enters a sport with an impact so crushing that it reshapes and even deforms the whole competition. So it was with the state-sponsored German grand prix teams in the 1930s, with East African distance runners over the past two decades, and with football clubs benefitting today from the sovereign wealth of Arab states. Team Sky’s recent dominance of cycling’s major events can be measured on that scale.

Many will mourn the passing of a name that helped bring British riders to the forefront of the sport: first Bradley Wiggins, then Chris Froome, and most recently Geraint Thomas. When Wiggins won the Tour de France in 2012, it was the fulfilment of what had long appeared an impossible dream. By the time of Thomas’s recent Tour victory – a sixth for Sky in seven years – it seemed almost commonplace. Froome’s victories in the Vuelta a España in 2017 and this year’s Giro d’Italia meant that he and the team held all three grand tour jerseys simultaneously.

Others will exude a sigh of relief that, after next season, the Sky logo will no longer be seen on a group of riders lined out at the front of peloton, paid vast sums to act as super-domestiques, controlling the pace with a degree of tactical discipline previously seen only in the teams supporting Lance Armstrong – a tainted precedent, of course.

So suffocating was their presence that for the 2018 season they changed the colour of their jerseys from black to white in an obviously symbolic attempt to improve the image of a team that had come to be seen, rightly or wrongly, as the sport’s bad guys. The decision to return to the original black for next year had already been made before Wednesday’s announcement of the title sponsor’s decision to withdraw support at the end of 2019.

Race organisers, most obviously Christian Prudhomme of ASO, the owners of the Tour de France, at first welcomed Sky’s investment in a perennially underfunded sport, along with the enthusiasm of their British supporters.

After that initial boost, however, they found themselves looking for ways to limit Sky’s success by reducing the size of all the teams from nine to eight in the guise of making the race safer for riders and spectators and musing about the possibility of banning the power meters which help the riders to follow the precise instructions of their sporting directors.

Some will be shocked by the global broadcaster’s withdrawal. By cycling’s historic standards, however, Sky’s involvement has been a long one. Sponsors come and go, and even those whose teams enjoyed a period of near-absolute dominance – Bianchi with Fausto Coppi, Saint-Raphaël with Jacques Anquetil, Faema and Molteni with Eddy Merckx – did not stay long. Other famous names – Legnano, Peugeot, Raleigh, Système U, Panasonic, Banesto – all disappeared, although retaining a place in the hearts of nostalgia-prone cycling fans.

When James Murdoch put Sky’s money into a British-based cycling project, his involvement was inspired by a personal enthusiasm for the sport. Like many wealthy young businessmen in the 2000s, he found cycling a superior alternative to golf, the preferred leisure/business interface of earlier generations. Gulping down a recovery drink at the summit of the Mont Ventoux was a more modern kind of fun than ordering a G&T in the clubhouse at Wentworth.

In Dave Brailsford he found a man who brought not just ambition and energy but vision and imagination to the plans they laid.

In October this year, however, Murdoch left the board of Sky after the company was sold to Comcast. Since his departure a colder view is likely to have been taken of the commercial benefits of putting an annual sum of around £30 million into a team whose reputation has been damaged by a wave of allegations that at one point forced Brailsford to appear before a parliamentary select committee.

Sky’s legacy will be a mixed one. The enormous sum (perhaps approaching £200 million) invested in Brailsford’s philosophy of marginal gains – which basically meant buying the best of everything, from the team bus to the riders’ pillows – helped raise cycling to a very different position in the national life, although it should never be forgotten that their success was built on the platform erected by the publicly-funded Olympic programme run by British Cycling. A complex and in some ways opaque arrangement under which they shared facilities and expertise was brought under examination when the stories about the questionable use of therapeutic use exemptions (TUEs ) emerged, along with the exposure of inadequate medical record-keeping.

History will see the 10-year era of Team Sky as an object lesson in the dangers that accompanied Brailsford’s vision and ambition. His approach made cycling more professional while forfeiting some of its humanity and spontaneity, the very qualities cherished by so many of its adherents. – Guardian

Heartbreak for Tuohy and O’Connor as Tigers down Cats 13:14
McIlroy well off pace as Thomas leads low-scoring Zozo 10:24
Seán O’Brien: Anger over my parents’ break-up has never left me 09:30
Touching response to Marcus Rashford’s clarion call reveals very best of England 07:00
Michael Walker: Is De Gea an answer again amid the questions at United? 06:00
Here is your handy guide to sport on television this week