‘I definitely have more in the tank, I have a lane, I have an opportunity’ 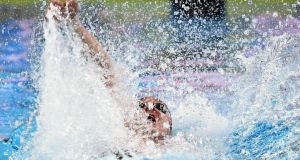 Shane Ryan is through to the 50m backstroke final at the World Short Course Swimming Championships in China after another record-breaking swim.

The 24-year-old, who is the current World University Games Champion and European bronze medallist in the long course (50m) version of the event, had progressed to the semi-final in an Irish Record of 23.03 seconds, second overall. In Thursday afternoon’s semi-final, he clocked 22.96 to finish third in the first semi-final and advance to Friday’s 12.30pm final in fourth place.

A delighted Ryan said after the race: “I’m very happy, it was a bit quicker, I executed a couple of good things. I definitely got the first 25 down, I can clean up the turn and then just come home a bit quicker. I definitely have more in the tank, I have a lane, I have an opportunity, I’ll just go swim and enjoy it.”

Earlier on Wednesday, Darragh Greene broke the team’s fifth record in three days in the heats of the 200m breaststroke. The National Centre Dublin swimmer took over three seconds off his previous best of 2:11.02 to win his heat in 2:07.60. That time bettered Andrew Bree’s 2007 Irish record of 2:07.95.

Speaking after the event Greene said: “I’m delighted with my swim today, my main focus was just to work on my skills and get a personal best in a morning swim, to be able to achieve an Irish record at my first World Championships is a bonus.”

Niamh Coyne will be the only Irish swimmer competing in heats on Friday morning. Coyne, shortlisted for the RTE Young Sportsperson of the Year during the week, will compete in the 100m breaststroke.