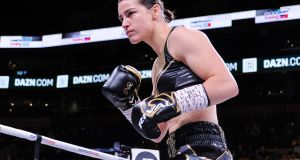 Katie Taylor and Eva Wahlstrom have clashed on three separate occasions in major tournaments, with the Wicklow native coming out on top every single time.

Much has changed since those amateur days and tonight Taylor puts her IBF and WBA World Lightweight titles on the line against WBC World super-featherweight champion Wahlstrom, in what will be their first clash as professionals.

“It’s definitely my biggest test to date but I feel well prepared for this type of challenge and I’ve been training hard over the last few months,” said the five-time world champion and Olympic gold medallist Taylor.

“Since the Cindy Serrano fight I just went into camp for this fight so I’m definitely ready, these are the kind of fights that I want, these are the challenges I want and I think on Saturday night you’re going to see the best of women’s boxing which is going to be huge.”

It also marks the first time either competitor has fought at the “mecca” of boxing, Madison Square Garden. Yet Wahlstrom remains unfazed about the magnitude of the challenge which lies ahead.

“I feel good about it, I try not to think about it. I try to think about the fight but not about the setting, how big it is, I just focus on Katie and me,” said Wahlstrom after Fridays weigh-in.

Taylor is long odds-on to defeat her former sparring partner which relieves Wahlstrom of the favourites tag and the pressures associated with it – something she gladly embraces.

“I think the pressure is on Katie. It’s really good to be a challenger this time, this is the first time that I am the challenger so I can be just relaxed and do my thing”, she said.

The 38-year-old Finn admittedly struggled to step up in weight for the bout tipping the scales at 133.5lbs with Taylor coming in at 134.25lbs. In taking the fight Wahlstrom also puts her unbeaten professional record on the line but it’s something she’s not overly concerned about.

For promoter Eddie Hearn, the fight will once again showcase the ever-increasing popularity of women’s sport and moreover the talents of Katie Taylor.

“Katie’s never boxed on a card where she hasn’t stole the show, every fight she’s been in people have left going, ‘wow, that Katie Taylor is something else’,” he said.

“I think Katie’s the exact same as she always is, she takes it very seriously, she’s not very big on media, appearances, she’s all about business. Wahlstrom looks in unbelievable condition, very impressive and it’s going to be a very tough fight.

“In women’s boxing you don’t see that many knockouts and Wahlstrom is very tough, it all depends on what Wahlstrom does, if she does come to fight then there could be a stoppage, if she looks to survive there probably won’t be one.

Wahlstrom’s dilemma remains how to overcome such an intensive opponent as the 32-year-old Bray native? Taylor’s last opponent Cindy Serrano came to the fight with the intention of putting it up to the Taylor but quickly reverted to total defence tactics.

“Opponents have got to come to fight and I think Eva will, I think she’ll be trying to win, said Hearne. “If she tries to win it will be a great fight, if she just boxes then it still will be a good fight. But why would you come all this way and not try and win and I believe Eva Wahlstrom will be trying to win.

The card will be live on Sky Sports Main Event for UK and Irish customers from 11pm.