He set a new Irish record of 22.76 at World Short Course Swimming Championships 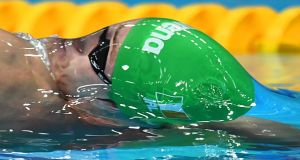 Shane Ryan claimed Ireland’s first ever World Senior swimming medal when the 24-year-old won a bronze in the final of the men’s 50-metres backstroke at the World Short Course (25m) Championships in Hangzhou, China.

Ryan is the current World University Games gold medallist and European long course (50m) bronze medallist. He took the bronze on Friday in a blanket finish just behind Russia’s Evgeny Rylov (22.58) and Ryan Murphy of the USA (22.63).

Pennsylvania native Ryan, whose father Thomas hails from Portarlington and who emigrated to the USA in the 1980s, declared for Ireland in 2016 having been a member of the US National squad. He also set his third Irish senior record in-a-row on Friday - clocking 22.76 seconds.

On Thursday Ryan was second fastest out of the heats into the semi-final where he was officially ranked in fourth place, becoming the first Irish swimmer to break 23 seconds for the ‘Splash and Dash’ event.

Ryan started the race in lane three and just held off the second Russian swimmer Kliment Kolesnikov out in lane seven. He got the touch ahead of the 18-year-old by one hundredth of a second to take his second international senior bronze medal since declaring for Ireland.

Ryan was also scheduled to compete in the heats of the men’s 50m butterfly on Thursday in Hangzhou, but scratched from that event to concentrate on “winning a medal for Ireland.”

He said: “Although it can be a tactical race to a certain extent, it’s all about the speed and getting the perfect finish to hit the wall.

“It’s been difficult for backstrokers this week as the venue has a domed roof and it can be difficult to pick a spot on the ceiling, so some competitors have been hitting the lane ropes as a result.

“But look, the whole (Irish) squad have been swimming well here and it’s great to be part of the team that are breaking records and to win a medal is a real bonus.”

Ireland have won European Short Course (25m) medals in the past, but never at world level.

The European medallists were Alex Murphy who won a 50m breastroke bronze at the 2015 meet in Israel. The UCD swimmer followed Dubliner Barry Murphy who won a bronze in the same discipline in 2013 in Denmark.

Ireland’s first ever European short course medallist was Andrew Bree who won silver in the men's 200m breastroke in Dublin back in 2003.

Ryan is due back in the water later on Friday in the heats of the men’s 100m freestyle and will be part of the Irish 4x50m medley relay squad.

Darragh Green swims the heats of the 50m Breastroke.