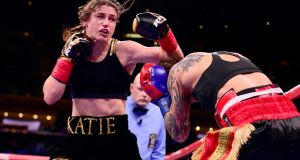 In what was an outstanding advertisement for women’s boxing, both fighters poured everything they had into a memorable contest, with the Bray native finishing the 10, two-minute rounds on a 100-90 tally on all three judges’ scorecards

“I said from the beginning this is going to be a great showcase for the sport, it was one of the best fights in women’s boxing, it was fantastic,” she said immediately afterward.

Taylor was sensational, out-landing Wahlstrom almost two to one in the shots count and is now the only Irish boxer to defend world titles in “the World’s Most Famous Arena” - extending her professional undefeated streak to 12 in the process.

Yet that strategy only enabled Taylor to give a dazzling display of combination punches to the body. The Irish fighter set her usual fast tempo from the opening bell, a strong right followed by a powerful hit to the chest had the crowd chanting “olé olé”.

Wahlstrom came out aggressively in the second but was quickly knocked back a peg by Taylor, who pummelled the Finn with impressive midsection combos.

By round four both fighters opened up, with the crowd embracing what was developing into a top-class contest as Wahlstrom became more offensive - but in doing so allowed a sharp Taylor to land a four-shot combo to the head.

Taylor began punishing Wahlstrom a lot more by the fifth, and the 38-year old’s feet appearing wobbly as she backed away from the onslaught.

However, Wahlstrom regrouped in the sixth and contributed some strong jabs, but Taylor’s war of attrition never looked like dissipating.

Wahlstrom went for broke in the eight, but she was met with a three-punch combo from Taylor to the chest and then the head.

It was much of the same in the closing rounds with Taylor landing some hard rights to finish out a magnificent contest and setting herself up for a blockbuster 2019.