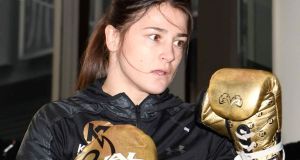 Katie Taylor participates in media workouts at Madison Square Garden in New York on Thursday ahead of her fights against Eva Wahlstrom on Saturday. Photograph: Sarah Stier/Getty Images

Katie Taylor says the defence of her IBF and WBA World Lightweight titles against current WBC World super-featherweight champion Eva Wahlstrom at Madison Square Garden on Saturday night is part of a journey to “forge a legacy in women’s boxing”.

Five-time world champion and Olympic gold medallist Taylor (11-0, 5KOs) was victorious three times against her 38-year-old Finnish opponent in the amateur ranks yet Wahlstrom (22-0-1, 3KOs] is set to be Taylor’s toughest professional assignment to date.

The undefeated Wahlstrom steps up to lightweight to clash with the 32-year-old Bray native and is aiming to become a two-weight world champion. She accepted the fight on short notice having originally been scheduled to fight in Russia this month only for her opponent to pull out through injury.

“I know Eva from the amateur days, we shared the ring on many occasions. Someone’s 0 has got to go and I can’t wait to fight at this iconic venue.”

The fight marks Taylor’s 12th professional bout, her third in New York but her first at “The Garden” and features on the Canelo Alvarez v Rocky Fielding undercard, part of “Canelo’s” five-year, 11-fight deal worth $365 million with “over-the-top” video streaming service DAZN.

“I’ve been lucky enough to fight in some iconic venues since turning pro two years ago but I’m not sure there’s any more iconic in a boxing sense than Madison Square Garden. I think every fighter dreams about stepping in the ring there and I’m no different,” said Taylor, who is now based in Connecticut.

“To get the opportunity to defend my world titles there is really very exciting.”

Promoter Eddie Hearn described Taylor as a “special talent” as she looks to sign the year off on a high, teeing her up for what could potentially be a blockbuster year for women’s boxing in 2019.

Taylor is touted to face Brazil’s WBO World Lightweight champion Rose Volante in the US in March before turning her attention to WBC queen Delfine Persoon of Belgium in the summer, which would see her become the undisputed world lightweight champion.

Taylor would then square off with Puerto Rican Amanda Serrano, whose sister Taylor defeated in October, and then possibly a mouth-watering clash against Norway’s Cecilia Braekhus, the undisputed world welterweight champion who is unbeaten in 35 bouts.

A long and exciting road awaits, but first the ‘Bray Bomber’ must overcome former sparring partner Wahlstrom who will be no pushover.

The card will be live on Sky Sports Main Event for UK and Irish customers from 11pm.