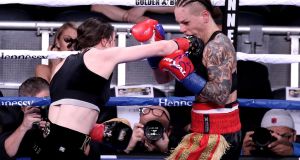 In what was a career-topping performance the Bray native defeated Finland’s Eva Wahlstrom by unanimous decision in what Taylor described afterward as “one of the best fights in women’s boxing”.

The five-time world champion and Olympic gold medallist outsmarted and outclassed her 38-year-old opponent from the opening bell, finishing the 10, two-minute rounds on a 100-90 tally on all three judges’ scorecards setting her up for a blockbuster 2019 as she navigates her path to become the undisputed world champion, and then some.

To give some context to Taylor’s accomplishment, Wahlstrom came into the contest as the current WBC super-featherweight world champion with an unbeaten 23-fight professional record.

In Boston last October it was Conor McGregor lining up outside Taylor’s dressing room, heaping praise on the 32-year-old.

On Saturday it was world heavyweight champion Anthony Joshua who came knocking on Taylor’s door such is her global appeal and the strides she is making in the sport.

Billed as her toughest professional fight to date, Taylor was simply sensational, out-landing Wahlstrom almost two to one in the shots count and is now the only Irish boxer to defend world titles in “the World’s Most Famous Arena” – extending her professional undefeated streak to 12 in the process.

“The Garden” soon erupted as she entered the squared circle to a rapturous crowd now on their feet singing along to the chorus.

Taylor’s ringside attire sported fewer gold trimmings than usual, her stunning display of rapid-fire combination punches throughout the contest would do the sparkling instead. Taylor set off on her usual fast tempo, a strong right hand followed by a powerful hit to the chest had the crowd chanting “olé olé”.

The tattooed and braided 38-year old came out aggressively in the second round but was quickly knocked back a peg by Taylor, who pummelled the Finn with impressive midsection combos.

By round four both fighters opened up, the crowd embracing what was developing into a top-class contest as Wahlstrom became more offensive – but in doing so allowed a sharp Taylor to land a four-shot combo to the head.

Taylor tactics of negating Wahlstrom’s jab worked to perfection and she began punishing the Finn a lot more by the fifth, her feet appearing weary as she backed away from a throbbing right hand.

Wahlstrom regrouped in the sixth and contributed some strong jabs herself, but Taylor’s war of attrition never looked like abating. Wahlstrom went for broke in the eight, but she was met with a three-punch combo from Taylor to the chest and then the head.

Taylor looked for the finisher in round nine but Wahlstrom was intelligent enough to engage her opponent leading to one of the night highlights; a breath-taking multitude of high octane punches to Wahlstrom’s midsection which had fans gasping and commentators comparing Taylor to Sugar Ray Leonard.

The two-minute rounds worked to Wahlstrom’s favour, preventing Taylor building the necessary momentum for a stoppage.

At the final Bell Wahlstrom instantly embraced Taylor – a show of mutual appreciation and respect for the former amateur foes, she lost little in defeat and played her part in what was an outstanding advertisement for women’s boxing.

The difference between this and the Serrano fight was that tonight she stepped on the gas,” said promoter Eddie Hearn. “She threw like 30 body punches consecutively I mean the crowd were going mad she’s a star.

Every time she fights she steals the show and the reception was incredible before and after.

The win sets Taylor up for a blockbuster 2019 where she hopes to win all four belts in the division beginning with a likely clash against Brazil’s WBO World lightweight champion Rose Volante in Philadelphia next March.

There’s also the much-touted clash with Amanda Serrano in the pipeline.

“The goal is to be the undisputed lightweight champion of the world. Obviously one of the biggest fighters out there is Amanda Serrano, and that’s a huge, huge fight.”