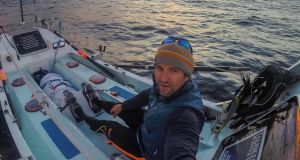 Gavin Hennigan: “I think I’d be probably more lonely in a crowded bar than I would be out here.”

Gavan Hennigan is closing in on the halfway mark in his row from the Canaries to Antigua.

He has been battling strong winds but has been continuing to hold third place – and is going faster than all the boats behind him. He is travelling over 50 nm (93 km) per day. Hennigan needs to make up just a little time to stay on schedule to complete the ocean row in 50 days.

The long hours and days on his own have posed him an inevitable challenge but he has dealt with it well.

“I suppose when you are out here you don’t have a lot of choice – you just have to get on with it. I suppose that’s what I like about this scenario. I think I’d be probably more lonely in a crowded bar than I would be out here.

“I’ve been grumbling, alright, missing family and friends. If I start thinking ahead too much, it’s still a long, long way to go; it’s kind of hard to see the end. But I’m really busy here; I’ve obviously got a lot of rowing to do, but I have a lot of other stuff to do on the boat. I try to keep the head down, keep rowing, keep busy.”

With two more days of that routine he will be closer to the West Indies than to Europe.

A former senior teacher at Portora Royal School (now, following an amalgamation, Enniskillen Royal Grammar School) and a stalwart of the very successful Portora Boat Club, he was instrumental in opening the club to prospective rowers from schools of different denominations in Enniskillen. The move came in the wake of the Enniskillen bombing in 1987.

“After the bomb I thought I had better do something to keep us from each other’s throats,” Northridge explained. “I went to St Michael’s [a Catholic school] and asked if there was anyone who wanted to row.”

This was a generous gesture. During the Troubles, Northridge was on the water with a group of boys. They heard a distant boom. The exploding bomb, he later learnt, killed the father of a pupil at the school.

In the New Year’s honours list, Robert Northridge was made an MBE for services to rowing and community relations in Northern Ireland. Sadly, it comes at a time when he has just lost his father, Reverend Canon Aubrey Northridge. He had lived to 100.

Limerick Boat Club has launched a campaign to replace the roof of its boathouse, which was peeled off in Storm Darwin in 2014, an incident recorded and posted on YouTube. Those who wish to donate can do so on gofundme.com

Robbie Brady nets as Burnley and Everton share the spoils 14:47
Fiji wrap up Covid-hit campaign with a win over Georgia 14:32
Antoine Rozner pips Andy Sullivan in Dubai smash and grab 12:54
Wallabies fall short as they draw with Argentina in the rain 11:38
Emiliano Grillo storms into the lead in Mexico 08:36