‘I’m trying to think of a word that’s not obscene,’ she said after loss to Madison Brengle 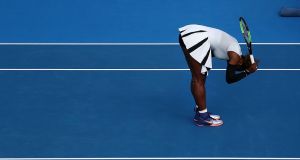 Serena Williams of USA reacts in her match against Madison Brengle of USA on day three of the ASB Classic in Auckland, New Zealand. Photo: Anthony Au-Yeung/Getty Images

Serena Williams’ Australian Open preparation suffered a jolt when her fellow American Madison Brengle stunned the world No2 by beating her 6-4, 6-7(3), 6-4 in the second round of the Auckland Classic on Wednesday.

Playing her first tournament since her semi-final loss at the US Open last September, Serena was left to rue the 88 unforced errors she made in the contest against an opponent 70 rungs lower in the WTA rankings.

“I really think I played - I’m trying to think of a word that’s not obscene - but that’s how I played,” she said after the loss less than two weeks before the year’s first grand slam at Melbourne Park. Eighty eight unforced errors is too much, just way too many. It’s a lot. I can’t expect to win hitting that many errors,” said the 35-year-old who had constant trouble with her ball toss in the swirling wind.

Brengle was trailing 1-4 before she staged a brilliant comeback to run away with the first set against the 22-times grand slam singles champion who had triumphed 6-0, 6-1 in their only previous meeting in 2015.

Serena was a set and 4-3 down when she made a comeback of her own to clinch the tie-breaker and force the decider.

The third set went on serve until the 10th game when Brengle held two match points, only for Serena to fight off both and slump in relief when she hit a crosscourt forehand to get back to deuce.

Brengle strode confidently across court, secured her third match point and stared in disbelief as Serena double-faulted to hand her the biggest victory of her career.

“I’ve never returned like that in my life. It’s a little frustrating, especially since I worked so hard in the off-season, but at least the conditions won’t be like this in Melbourne,” Serena said. “She obviously did a much better job than I did. I really abhorred the conditions. I don’t think I’ve ever hit 88 errors in my career. I could Google that and that’s probably accurate. So there’s no need to look back on such a crappy game.”

Brengle meets seventh seed Jelena Ostapenko in the quarter-finals. “Honestly I don’t know (how I won),” the 26-year-old American said. “It’s so cool. It’s what you dream about, playing the best in the world.”

Earlier, Serena’s sister Venus beat the local favourite Jade Lewis 7-6(2), 6-2 before withdrawing with a right arm injury. “I love this tournament and I’m really sad that I have to withdraw, but I’m happy to have had the opportunity to be here again this year,” Venus said in a statement ahead of her match against Japanese youngster Naomi Osaka.

Kyle Edmund is through to the quarter-finals of the Brisbane International after his opponent Lucas Pouille retired trailing 6-3, 3-1. The British No2 Edmund will now face the winner of the second round match between second seed Stan Wawrinka and Viktor Troicki. The third seed Kei Nishikori booked his place in the last 16 after coming from a set down to beat qualifier Jared Donaldson 4-6, 6-4, 6-3.

The British No3 Naomi Broady got her 2017 season off to the best possible start as she breezed into the second round of the ASB Classic in Auckland. The world No90 beat her higher-ranked opponent Danka Kovinic 7-6, (5), 6-3 and ensure she remains in the top 100.

Broady reached the quarter-final of this tournament last year but looked up against it early on against the world No70 as she was broken twice to trail the first set 5-2. But she found her groove and rattled off four successive games to send the set to a tie-break, where she again wiped out a deficit, winning five successive points to claim it 7/5. The second set followed a similar patter as an early break for Kovinic saw her take a 3-0 lead but Broady’s response was even better as she won the next six games to get the job done in straights.

The British No2 Heather Watson suffered defeat to Kristina Mladenovic in the Hopman Cup. There are no ranking points on offer at the mixed-team international tournament in Perth, where Watson is playing with Dan Evans, but she fell to her second loss of the year as she went down to the Frenchwoman 6-4, 5-7, 6-3.