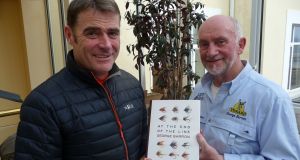 Author George Barron (right) presenting a copy of his book At The End of the Line to show organiser, Stevie Munn at Fly Fair in Galway. 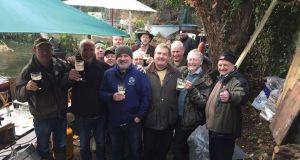 AT the outset to his new book, George Barron makes it abundantly clear he is dealing with classic wet flies of his own making for wild brown trout associated primarily with the great loughs of Ireland.

“I make no apology for my ongoing love affair with all aspects relative to fly fishing in the land of Erin. Ireland’s fishing heritage is unparalleled and steeped in great angling storytellers and the legendary boatmen who have dispensed piscatorial wisdom for generations,” he says.

At the End of the Line is partly an autobiography of the author. Born in Scotland before moving to his adopted country Wales, he took up fishing over 60 years ago and, similar to most of us from that era, settled for a hazel stick with hook whipped to 18 inches of gut.

Fishing for pleasure changed to the competitive international scene in the late 1980s. Here he went on to fish and captain the Welsh team, and in 2013 was voted president of the International Fly Fishing Association (IFFA).

George Barron is, in my opinion, a fly dresser of the highest quality. Certainly if one looks at the 150 patterns listed in his book, it is easy to see why he is top of his game. A major component to success is his use of hen hackles in almost all of his creations.

“First and foremost the dressing should be constructed using materials capable of instilling movement and creating life-like characteristics in the water. In the loughs of Ireland, the answer to create an extra ‘kick’ in the fly can often be achieved by using a mix of hen hackles, dyed to suit regional preference.”

The book is beautifully laid out encompassing all standard wet flies including the Bibios, Sedges, Olives, Bumbles, Dabblers and Leggy Flies, each prefaced with Barron’s experience and including his personal fly-tying techniques and opinions.

The fly images by Gayle Marsh, picture editor on a south Wales newspaper and international angler, are sure to provide the success the book deserves. They are fantastic and easily the best I have ever encountered.

“The message is crystal clear”, he says, “do not stick too rigidly to the standard patterns but experiment with your own variations. Dressings “as listed” do little to enhance their catching ability, mainly because they are often dressed using materials that are too stiff to create the desired amount of movement in the water to induce a trout to take the fly.”

Take, for example, the Pretender, a name derived because it had a “pedigree similar to Bonnie Prince Charlie (The Young Pretender) and his pretensions to be king of the heap. The colour mix is the perfect recipe for Irish wild brown trout”.

“I tied up six of these flies for Mask and shared them between four anglers. On the day 21 trout were caught between us. I’ve always believed that the best colours to tempt early season trout are wet flies containing a mixture of black, red and silver.”

At the End of the Line - Classic Loch-style Wet Flies by George Barron. Retails at £25 (€29.33 in hardback.) Available in bookshops nationwide and george_barron@btinternet.com.

*At time of writing we still await the first salmon of the New Year. The Drowes River in Donegal/Leitrim, usually first off the mark, still awaits the first bar of silver.

“A fresh fish was lost on Monday in the Mill Pool,” according to proprietor Shane Gallagher. The run appears to be getting later each year, the last time we caught the first fish on opening day was 2013, he said.

On the Liffey at Islandbridge, the traditional gathering of club members celebrated the New Year in fine style but, alas, apart from a small sea trout caught on spinner, there was no salmon to report.

“Even the fish counter at the weir failed to record a fish,” Colm Adams said.