Andy Murray starts year with win over Chardy in Qatar 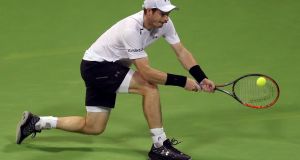 World number one Andy Murray extended his career-best winning streak on the ATP Tour to 25 as he swept past French man Jeremy Chardy 6-0 7-6(2) in his opener at the Qatar Open on Tuesday.

In his first competitive match of 2017, the 29-year-old Scot, who received a knighthood in the New Year’s Honours list after a stunning 2016, dropped seven points in the first set.

Chardy, ranked 69, broke serve at the start of the second set and although he dropped his own immediately he pushed Murray hard for the rest of the match on a warm desert evening.

Twice Chardy held serve to stay in the match and stretch Murray into a tiebreak but the pressure eventually told on the Frenchman as Murray completed a useful workout when Chardy sent a forehand volley over the baseline.

Olympic and Wimbledon champion Murray, bidding for a third Doha title after wins in 2008 and 2009, will play Austrian Gerald Melzer in the second round.

He is unbeaten in regular tournament play since losing to Kei Nishikori in the US Open quarter-finals in September and won his last five tournaments of 2016 to topple Novak Djokovic from the top of the rankings.

“He didnt’t start well and it’s always difficult in the first match of the year but in the second set he played extremely well and pushed me hard,” Murray said.

Defending champion Djokovic, who will be bidding for a seventh Australian Open title later this month, opened his account on Monday with a straight sets win against Jan-Lennard Struff and will face Argentine Horacio Zeballos on Wednesday.

Rafael Nadal’s mission to add to his 14 grand slam titles in 2017 received an early boost as the Spaniard saw off Alexandr Dolgopolov in straight sets at the Brisbane International. The 30-year-old world number nine, without a major prize since he won the French Open in 2014, needed only an hour and 16 minutes to dismiss Ukrainian Dolgopolov 6-3 6-3 in Queensland in his first match of the year.

Nadal, seeded fifth on his debut appearance at this hard-court tournament, will next face Mischa Zverev after the German defeated teenage qualifier Alex De Minaur, also by a 6-3 6-3 scoreline. Standing in the way of British hopeful Kyle Edmund is Lucas Pouille, through to the second round following his 7-6 (8/6) 7-6 (7/4) victory over fellow Frenchman Gilles Simon.