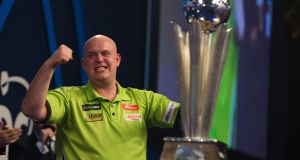 For 730 days there was something missing from Michael van Gerwen’s life. He won 43 tournaments in the two years after being dethroned as world champion – but not the one he really wanted. Before every single televised match he had to listen to the same piercing introduction: “The world No 1 – and the former champion of the world”.

There were concerns Van Gerwen might want – need – to win it too much this year.

Instead his desire was an endless source of fuel that catalysed some of the greatest darts ever seen. His journey culminated with an emphatic 7-3 victory over the reigning champion, Gary Anderson, in the final at Alexandra Palace. It was his 44th tournament win in two years, and his crowning glory.

There were cathartic tears from Van Gerwen at the end of the match, and even more during a moving embrace with his wife, Daphne, moments later.

It was one of many feelgood images from an exceptional match, played at blistering speed by two geniuses with enormous mutual respect.

At the end, during the presentations, they stood laughing and joking like two old mates in the pub.

Van Gerwen averaged 108.06 and Anderson 104.93. In years to come the tournament may look processional – Van Gerwen lost only nine sets in seven matches – but he was pushed seriously hard.

Three of the four highest losing averages in the history of the world championship, including Anderson, came against Van Gerwen in this tournament.

He is a formidable, borderline unbeatable fusion of divine talent and intimidating mental strength, and an authentic superstar. After the match, his press conference was interrupted because of a call from the Dutch prime minister, Mark Rutte.

Before the tournament, Van Gerwen said a year in which he won 25 trophies – including all televised ranking events and the Premier League – would be a “disaster” if he did not win the worlds.

“I put so much pressure on my shoulders because I wanted to win so much,” he said after beating Anderson. “This means everything to me.”

The Sid Waddell Trophy weighs 25kg, yet Van Gerwen held on to it throughout his post-match interview on stage. “I’ve waited a long time for this. I’ll probably sleep with it tonight.”

His win over Anderson followed a very similar pattern to the semi-final dismantling of Raymond van Barneveld a day earlier, in which he shattered the record for the highest average in a world championship match.

Both games were 2-2 before Van Gerwen went into overdrive. To complete the sense of closure, Van Barneveld and Anderson were the people who knocked Van Gerwen out in the past two years.

The start of the final was an unyielding struggle, with each of the first four sets going to a last-leg decider.

It’s often said that the Van Gerwen surge, in which he reels off leg after leg, hurts less in set play. That is true – but not when you extend it for as long as he did here. Anderson’s aura of invincibility, built up over 17 consecutive wins in the world championship, was obliterated. Not even he could live with Van Gerwen. Not even a robot could have lived with him. The only thing that delayed the Dutchman was a stage-crasher who tried to present him with the trophy before the match had finished.

That led to an unexpected encore, in which Anderson came to life and both players hit a barrage of 180s. The eventual total of 42 maximums smashed the world record of 34 in one match, set during last year’s final between Anderson and Adrian Lewis.

Van Gerwen’s moment finally came when he hit the bullseye to break Anderson and win 7-3. It was the biggest win in the final in five years. Van Gerwen is so good that he made a virtue of an anti-climax.

This was not the dream, last-set thriller that everyone hoped for, but it was an exhibition of greatness that will take out a lease in the memory bank.

Not least because of what it meant to Van Gerwen. As he lifted the trophy on stage, the new darts anthem, Freed From Desire, blared out for the final time at this year’s world championships. Van Gerwen was free from his own desire to win the title again.

Moments before that he was reintroduced as the “two-time world champion”. He has waited a long time to hear those words.