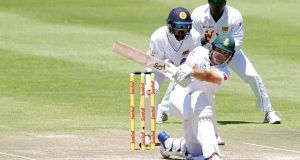 Dean Elgar claimed a half-century as South Africa strengthened their position to leave Sri Lanka with a mountain to climb in the second Test at Newlands.

Elgar added 55 – which included seven boundaries from 91 balls – to his first-innings 129 as Sri Lanka bowler Suranga Lakmal took four wickets before the hosts declared on 224 for seven in Cape Town.

The tourists struggled to make any strong inroads in reply before eventually finishing the day with 130 for four, trailing by 376 runs.

South Africa openers Stephen Cook (30) and Elgar added to their overnight 35 with a strong first-wicket stand of 64 before the former became Lakmal’s first victim and Hashim Amla fell for a duck five balls later.

With a massive second-innings total essential – as they trailed by 506 – the tourists lost opener Dimuth Karunaratne and number three Kusal Mendis both cheaply to Philander with just 25 runs on the board.

Kaushal Silva hit two fours to reach 29 before Kagiso Rabada struck twice in three overs as Sri Lanka slowly started to build on their total. Angelo Mathews (29) and Dinesh Chandimal (28) remained unbeaten at stumps leaving the tourists with a big job to do on day four.