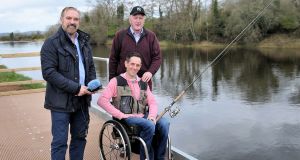 “This new facility is going to be a life-changer for me,” declared Lester Cassidy following the opening of the East Mayo Anglers’ Association (EMAA) disabled angling facility by the Minister for Rural and Community Development, Michael Ring, on the river Moy at Crillaun Straide, near Foxford, Co Mayo, last weekend.

In 1998, Lester broke his back in a scaffolding accident that left him paralysed from the waist down. Prior to the accident, fishing was his passion and, although only 19 at the time, he thought he would never fish again.

“My father, also a keen angler, was a great help and was adamant to get me fishing again. We crossed fields, climbed under wires, he even made a contraption with wheels to bring the gear. Anyway, we got to the river somehow and I caught fish.

They say fishing is good for the mental health – well, I can certainly vouch for that

“But it was very difficult to find somewhere with good access. I’m 20 years in a wheelchair now and not able to cross fields anymore, so to have a facility like this is a real game-changer for me.

“I’m not relying on my dad anymore, it’s fully accessible and safe. Not only that but it’s one of the best spots on the river, where you’re able to catch wild salmon. It’s really fantastic,” he said.

“I have three young children and I plan to bring them along and teach them all the things my father taught me. It’s an independent thing because I’m able to do it all myself. They say fishing is good for the mental health – well, I can certainly vouch for that,” he said.

Launching the facility, Michael Ring said: “This project would not be possible without the funding of €154,000 provided by Inland Fisheries Ireland through the National Strategy for Angling Development. This accounted for 90 per cent of the funding with a further €30,000 generated by the club.

“I am thrilled to see the project completed to such a high standard, with a 75-metre boardwalk with ramps and railings to safely access the river. There are also changing facilities and upgrades to the car park,” the Minister said.

EMAA committee member John O’Connor added: “It’s been 10 years in the making and planning and we eventually got it up running and were very proud of it. The river [in general] is not really suitable for people with any kind of disability because of the steep banks, etc.

“Now, with our new facility, we can invite anglers with disabilities and juniors. Already, interest has been forthcoming from the British and Northern Ireland disabled angling associations. We want to get the word out there. Before we couldn’t, now we can.”

The stretch of the Moy selected is one of the best beats on the river. “We actually had club members complaining because they can no longer fish the pool. If there’s a salmon in there we don’t want you getting in ahead of a disabled or junior angler,” he said.

The provision of toilet facilities was a major stumbling block as the facility had no planning permission. With the help of Liam Gavin of IFI, a compromise was reached to allow the construction go ahead on the understanding that toilet facilities would be provided as phase two of the project.

The opening ceremony concluded with the Conor Walsh Memorial Cup presented by Ms Marie Holmes Walsh (mother of the late musician Conor Walsh, who had a passion for angling) to Bob Mayne, the captor of the first salmon of the 2019 season, on EMAA club waters. The 4.5kg (10lb) springer was caught at the Boat Hole on worm.

My sincere condolences are extended to the family of the late Sean Maloney, who drowned while fishing on Lough Mask last month. I knew Sean very well and had the pleasure to fish with him on numerous occasions.

He was always good-humoured and full of smiles and got on great with all his angling pals. Sean looked forward immensely to the “brew-up” at lunchtime on the lake. Mind you, I always felt the “Billy can” had seen better days. But the tea tasted exquisite.

Sleep well, my friend. You will be missed.

Waterford Trout Angling Association is holding the Irish heat of the UK Scierra Pairs for the second year running, next Saturday (April 13th) on Knockaderry Fishery in Kilmeaden, Co Waterford.

Last year’s Irish heat winners Brian and John Brennan went on to fish the UK final, finishing in second place and receiving a cheque for £1,000. Entry fee for Saturday’s heat is €50 and club rules apply, eg two fish per angler.